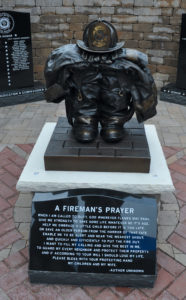 I am going to attempt to explain the time-line and process as to how this memorial project came about. The need and the people that came together to help us create such a wonderful monument.

It was mid-summer of 2017, when discussion were held with Chief Lee Stevens, Chief 1, and myself in regards to the need to have the memorial plan become a reality. At this point Chief Stevens handed the project over for completion and oversight out of my office. When the project was approved to move on we went out and made contact with local Boy Scout Troop 32. We were very lucky to have a grandson of a previous South Metro Fire Department member, Robby Keays, accept the challenge for his own Eagle Scout project. We decided to have several pre meetings to make sure, his Eagle Scout project would be followed correctly, and that his focus would be to create, and provide the walkway for the memorial grounds. When the first meeting was done, we nicknamed his portion of the memorial project, “Paving the Way.” END_OF_DOCUMENT_TOKEN_TO_BE_REPLACED