We often joke that where there is smoke there is fire. As fires burn they produce smoke. It is a fundamental of fire.

Smoke is the result of incomplete combustion and carries a variety of toxic by-products. Smoke includes three major components: particles, which are solids, vapors, which are finely suspended liquids, and gasses.

Smoke contains vapors. Vapors are small droplets of liquid suspended in the air. Some of the vapors are the result of us applying water to the fire. Other droplets result from products as they burn. When items burn they produce droplets that become part of smoke. END_OF_DOCUMENT_TOKEN_TO_BE_REPLACED

Smoky environments are dangerous. Smoke is the result of incomplete combustion and contains a variety of toxic by-products. 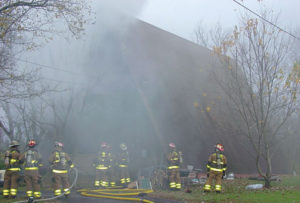 As you pull up to a fire you quickly take a span shot of the structure, if you see smoke and if you see flames. As you evaluate the structure, you can determine if it is a resident, an office, a retail store or factory. Many things are running through your mind as you begin your attack.

But how many times have pulled up on a structure and thought about its size? Like really thought about the size of the structure that is on fire. END_OF_DOCUMENT_TOKEN_TO_BE_REPLACED