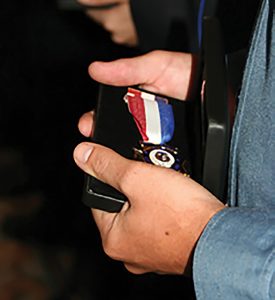 Missourians and the state’s first responder community faced unprecedented public health challenges in 2020 and continued to respond with heroic and lifesaving deeds to protect their fellow citizens. The Department of Public Safety is now soliciting nominations to honor first responders and civilians who went above and beyond to save lives and protect others.

The Missouri Public Safety Medals – Medal of Valor, Governor’s Medal, and the Public Safety Civilian Partnership Award – will once again be awarded for outstanding acts to protect the public and save lives. The nomination deadline for the awards honoring acts performed in 2020 is February 28, 2021. The awards are:

The Missouri Medal of Valor recognizes heroic service by first responders in an effort to save a life. The Medal of Valor is Missouri’s highest award for public safety officers and is awarded to those who exhibit exceptional courage, decisiveness, and swift action without regard for their own safety in their attempt to save a life. Law enforcement, fire and emergency medical services, state and local corrections officers, court officers, and emergency management personnel are eligible. END_OF_DOCUMENT_TOKEN_TO_BE_REPLACED