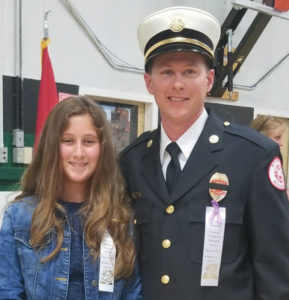 On June 19, 2017, the Mayview Fire Protection District (MFPD) experienced every department’s worst nightmare. While responding to a call, volunteer firefighter, Jeff Sanders died in the line of duty. This tragic loss devastated the entire community.

Jeff served the MFPD for more than thirty years and was a shining example of volunteerism in the community. He was admired by many people and especially inspired young resident, Abby White. Abby is the eleven-year old daughter of MFPD Chief Kris White. Abby asked her dad and others in the community if there was a way to put up a memorial alongside the highway. She was determined to honor her fallen hero and wanted to find a way to make it happen. By word of mouth, her message spread to Representative Glen Kolkmeyer and the Firefighter Jeff Sanders Memorial Highway Project was born.

With the help of her dad and step-mom, Abby got to work right away. First, she requested and received approval from the Sanders family to move forward with the project. Then, she asked her fellow 40-Ville 4-H Club members to make this one of their community service projects. Together, they are working to raise $2,400 to permanently designate a section of

E Highway from the Mayview Fire Station to I-70 as Firefighter Jeff Sanders Memorial Highway. Representative Kolkmeyer is the legislative sponsor for this project and will assist in getting the designation signed into law by the Governor. END_OF_DOCUMENT_TOKEN_TO_BE_REPLACED