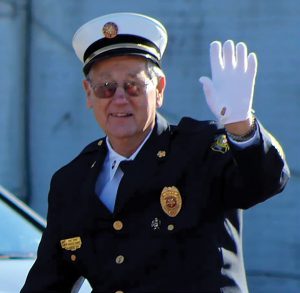 Chief Charlie Jones honored with a surprise salute during the Caruthersville Christmas Parade.

On Saturday, December 5, 2020, the Caruthersville Fire Department members honored Chief Charlie Jones with a surprise salute during the Caruthersville Christmas Parade in which departments from all over the county took part. The celebration continued with a special ceremony held at the fire station later that afternoon.

Today, we share Jones’ story of how he went from a child chasing fire trucks to being chief and holding the unique honor of serving in the same station for 50 years.

When Charlie Jones was only 8 years old he and his family lived at 705 Eastwood. Being only three blocks from the fire station, he would hear the trucks as they left the station and would always wonder where they were going.

“You could follow the trail of water from the 1956 Ford fire truck since it would spill out some water each time it made a turn,” said Jones. “Then if it was a bad one, I would hear the 1947 Diamond T truck respond, and it had a distinct sound from the motor. So I would get on my bike and ride it to wherever the fire was and watch the firemen.”

It was one specific fire that led to him making the decision that he would one day don the fireman’s gear. END_OF_DOCUMENT_TOKEN_TO_BE_REPLACED