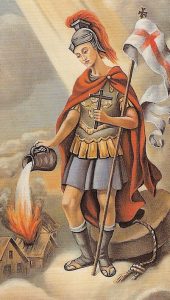 Legend of St. Florian extinguishing a massive fire with only one bucket of water and saving a village from ruin.

The fire service in the United States has a long and glorious history stretching back to the early 1700s. Even in the early days of the fire service, the mission was the protection of life and property. With this noble desire and calling for a person to help their fellow man, it is easy to understand how this vocation has become an honored profession for over 275 years. Many times the Bible verse from John, Chapter 15:13 is quoted as an example of the conviction of firefighters, “Greater love hath no man than this, that a man lay down his life for his friends.” In the early 1900s, Chief Edward Croker of the New York Fire Department eloquently spoke about what it means to be a firefighter. He said:

Our proudest endeavor is to save the lives of men-the work of God Himself. Under the impulse of such thoughts, the nobility of the occupation thrills us and stimulates us to deeds of daring, even at the supreme sacrifice. Such considerations may not strike the average mind, but they are sufficient to fill to the limit our ambition in life and to make us serve the general purpose of human society.
Based on the willing service of so many and the perilous challenges they faced, a strong history and tradition developed over time as part of the profession of firefighting, whether career or volunteer.

Though many significant dates come to mind that contribute to this history and the subsequent traditions, one that comes to mind during May is the recognition of International Firefighters Day on May 4th. The significance of this date and how it came to be, has a special history. 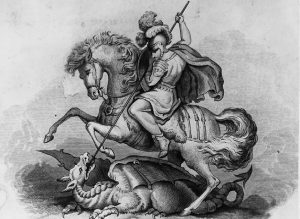 May 4th is also known as the feast day of Saint Florian. Venerated as a saint in Christianity, St. Florian is the patron Saint of Firefighters. St. Florian was born in 250 AD in what is now Austria. He served in the Roman Legions. Even though Christianity was not tolerated by the Roman government at the time, Florian became a Christian. He refused to persecute Christians and was ordered put to death, originally to be burned to death, but the sentence was changed to drowning. Legend has it that during his life St. Florian put out a massive fire with only one bucket of water, saving a village from ruin. For this and his other protective acts and being martyred, he was canonized as a Saint. In artwork, he is often depicted pouring water from a bucket or chalice to extinguish a fire. 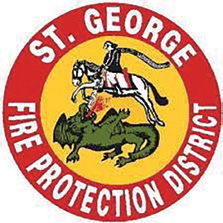 Though many firefighters may think of St. George as being the patron saint of the fire service because legend has it that he fought and slew a fire-breathing dragon, he is not. St. George has many different patronages as a saint and in some cases, these do include some fire departments and communities. Several fire departments in the United States are named after St. George or the community where they are located. I had the privilege of serving with the St. George Volunteer Fire Protection District in East Baton Rouge Parish in Louisiana during my tenure at LSU Fireman Training many years ago. The emblem on the department’s patches and apparatus included a figure of St. George mounted on a horse extinguishing a dragon’s fire.

So how did the Feast Day of St. Florian, the patron saint of firefighters, become an international day of recognition? Like so many traditions in the fire service, this one was based on a fire-related tragedy. It occurred on December 2, 1998, in the Linton Community of Australia. A large brushfire was threatening the residents, and mutual aid was called to fight the fire. A five-member strike team was responding to the fire when a sudden wind shift drove the fire toward their vehicle engulfing it and causing the death of all five firefighters. In January of 1999, to create a remembrance to honor these Line of Duty Deaths (LODD) and all firefighters that continue to serve, a proposal was mailed throughout the world to establish May 4th, the Feast Day of Saint Florian, as International Firefighters Day (IFFD). It was quickly accepted in many countries and has continued to spread as a day of recognition for all firefighters.

The founder of IFFD, Lt. JJ Edmondson of the District 8 Headquarters Fire Brigade, Country Fire Authority (CFA) in Victoria, Australia, commented about the universal role of firefighters throughout the world:

The role of a firefighter in today’s society, be it urban, rural, natural environment, volunteer, career, industrial, defense force, aviation, motorsport, or other is one of dedication, commitment, and sacrifice – no matter what country we reside and work in. In the fire service, we fight together against one common enemy, fire, no matter what country we come from, what uniform we wear, or what language we speak.

In addition to IFFD, the fire service in the United States have their days of remembrance at the national, state, and local levels. In the U.S. there is the National Fallen Fire Fighters Memorial that normally takes place in October each year during the Sunday that falls within National Fire Prevention Week, which memorializes the date of the Great Chicago Fire that occurred October 8–10, 1871. The memorial weekend takes place at the National Fire Academy in Emmitsburg, Maryland, where the National Fallen Fire Fighters Memorial is located. It recognizes all U.S. firefighters who have died in the line of duty from the previous year.

In Missouri, the Fire Fighters Association of Missouri (FFAM) and their Memorial Foundation conduct ceremonies normally in May each year to recognize firefighters who have fallen in the line of duty, as well as fire service veterans who have passed away during the previous year. This year because of the pandemic, the ceremony has been moved to October 9-10, 2021. The ceremonies are held at the Missouri Firefighter Memorial in Kingdom City, Missouri. For another fire service history lesson, visit the memorial off 1-70 at the Kingdom City exit, and walk around behind the large kneeling firefighter statue and read the plaque which covers the history of the statue.

And finally, this year is the 20 anniversary of the terrorist attacks in the U.S. on September 11, 2001. This date is dedicated each year to the memory of the people and firefighters/first responders that were killed during the attacks. President George W. Bush first proclaimed a day of mourning on September 14, 2001, as a “National Day of Prayer and Remembrance for the Victims of the Terrorist Attacks on September 11, 2001.” It was later voted on by the U.S. Congress to establish an annual day of remembrance on September 11. This is commonly known now as Patriot Day. This year Missouri will be holding several events at the state capital in Jefferson City to recognize the 20th anniversary of this tragic event that occurred on U.S. soil. Please join firefighters, first responders, and Missouri citizens as we honor and remember those who served, and those who continue to serve to protect our citizens, communities, state, and nation.