You are here: Home > A Blazing Success 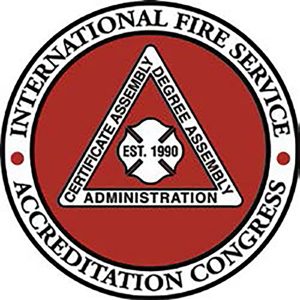 The IFSAC Certificate Assembly accredits entities that certify the competency of and issue certificates to individuals who pass examinations based on National Fire Protection Association (NFPA) fire service professional qualifications and other standards approved by the assembly. The accreditation is made at the state, provincial, federal or territorial level for firefighter certification programs.

Before accreditation is granted, the institution must do an integral self-study followed by an on-site review by a panel consisting of peer representatives from other member institutions.

IFSAC has come a long way since its inception in 1990. Prior to 1990, there was only one accrediting body for certifying entities, and it was disorganized and running poorly, leaving many in the fire world fearful that it would go away completely.

A two-day conference in St. Louis in August
1990 set the path for the inception of IFSAC. The “Fire Training and Certification Program Accreditation Conference” addressed the issues relating to certification, qualification and accreditation in fire service training systems and drew many state officials who had concerns about the future of professional recognition for their certification programs.

Attending the conference was John Wolfe, a Kansas fire chief who ultimately laid the groundwork for much of IFSAC’s definitions and policies. In his presentation, he spoke of the confusion that existed between terms such as certification, qualification, standards and accreditation, and he said a national system of certification was needed.
Also presenting at the conference was Harold Mace, the then director of Fire Protection Publications and Fire Service Training at OSU. He spoke about his vision of a new peer-driven system of accreditation that would include an accreditation congress, a board of governors and an administrative section.

He also described the process he envisioned for how entities would become accredited, proposing to call this new congress the Fire Service Accreditation Congress (FSAC) and laying out a well-run operation. Additionally, he said it could be implemented immediately because OSU was willing to make a long-term commitment to the system, providing additional credibility.

“Harold Mace was really the godfather of this whole operation,” said Bill Westhoff, IFSAC’s first manager. He served on a number of National Fire Protection Association committees as the standards for firefighters were being developed. These standards specified capabilities of skills, of knowledge, of information that the national group decided it needed to have to be at various levels, such as firefighter I, firefighter II, Investigator, etc. In order to ensure those were being properly examined and utilized at the various cities, states and countries, Mace had the idea that there should be a peer-driven accreditation congress that evaluated the testing procedures at each of these entities consistently across the board.”

After his presentation, the state representatives there were interested and on board with the idea of a peer-driven concept that Mace presented. Having OSU house the program made sense.

Westhoff was appointed IFSAC’s first manager, and things started unfolding. In November 1990, Westhoff made a presentation on the new International Fire Service Accreditation System, making this an international organization, which would be a first for fire accreditation. At the time, Westhoff was on the staff at Fire Protection Publications and had been a state fire training director in Missouri. He also held the title of fire chief and had a degree in fire protection and two degrees in education.

“Once IFSAC was off the ground, we progressed along to where we were selecting site teams to go to various states and provinces, and we found that there was a need from degree programs that were popping up in various places,” Westhoff said. “After a couple of meetings, it was decided to split the accreditation congress into the degree side and the accreditation side for states and provinces. We developed a system that would ensure that if you were trained to a firefighter II level in the state of Washington or the state of California or Missouri, it was the same in Oklahoma and any other state involved in the accreditation congress.

“It was a very close-knit group who all had the same objectives in mind, and that was to improve training the fire department personnel,” Westhoff added. “Of all the various things I’ve done in my fire service career, my involvement with IFSAC had more of an impact than anything. I’m more proud of that than a lot of other things I’ve done.”

Westhoff has five generations of fire chiefs in his family. His grandson just finished his tenure in the Air Force Fire Protection system, earning about 20 fire service certifications from the accreditation program, allowing him the opportunity to go anywhere.

Westhoff retired from IFSAC in 1996, leaving the congress in a position where more and more states were eager to join. Today, the organization includes 114 member entities including 41 states, 10 Canadian provinces, South Africa, Egypt, Germany, Iraq, Saudi Arabia, Qatar, Kuwait, Oman, the United Kingdom, the Canadian Armed Forces and the U.S. Department of Defense.