You are here: Home > Firefighters help newborn into the world 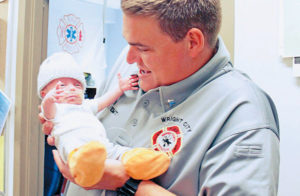 Firefighter Keith Terry held baby Greyson Schuster for the second time in his life in early August, not long after Greyson was released from two months in the hospital.

The first time Terry held the baby boy, he said Greyson was smaller than his shoe.

To be fair, Terry wears a size 13 shoe. But Greyson was tiny on the day he entered the world, 2 1/2 months ahead of schedule. He was 13 inches long and a little less than 3 pounds.

Terry met Greyson was when he and a crew of Wright City firefighters helped mother Bethany Schuster deliver the baby on June 6, 2018. She was due to give birth August 21.

Even though Greyson wasn’t quite ready for it, along he came anyway, catching Bethany by surprise at home with her family.

“I had been having contraction all day and didn’t know it,” said Bethany, who is a first-time mother. About an hour after visiting the hospital and being sent home, she was on the floor of the bathroom giving birth.

“The only thing I could think was ‘Oh my goodness, oh my goodness,’” Bethany recalled. “About five minutes later, these amazing men showed up to assist and took care of everything.”

Wright City firefighters were the first emergency responders to arrive at Bethany’s home off of Highway J in Lincoln County. Greyson was almost all the way out when they arrived.

“He was fussy,” Terry commented. “He was making noise. That’s a good thing.”

Terry is a certified emergency medical technician, as is Fire Capt. Scot Gibson, who was also on the responding crew. With them were firefighters Kevin Hakenewerth and volunteer Darren Murray, along with several of Bethany’s family members.

Squeezed in the small bathroom with Bethany and baby Greyson, Terry said he did what they are trained to do. He tied off the umbilical cord and wrapped Greyson in towels to keep him warm. The firefighters kept everyone calm while they waited for Lincoln County Ambulance to arrive and whisk Greyson away to the hospital.

Once the baby was on the road, the fire crew cared for Bethany until a second ambulance could arrive to help her.

The ambulance staff were absolute professionals, the firefighters said, and were key to helping Bethany get through the rest of her birth.

On August 9, Greyson and Bethany were both doing well. The baby had grown by 5 inches and 3 pounds when they and their family paid a visit to the fire station in Wright City. Greyson still needs an oxygen tube to help him breathe, but otherwise has had few health issues. While visiting with the firefighters, he was calm and awoke only for a quick stretch (and perhaps some other business). 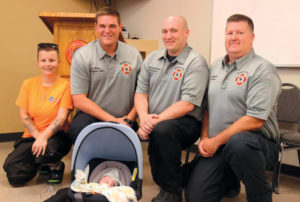 “It’s nice to have a positive outcome,” commented firefighter Kevin Hakenewerth. “Usually when we’re responding, it’s to someone injured. Being able to help somebody with the birth of their child is a cool experience.”

It’s also a rare experience for the firefighters, who sometimes are called to check on mothers having pregnancy troubles, but almost never expect to have to put their basic obstetrics training to use. Capt. Gibson said in his 11 years with Wright City Fire Protection District, this is the first delivery he has helped with, and only the second total in his 15-year career.

To commemorate their service, from now on each of the four firefighters on the crew who responded that day will wear a blue stork pin on their dress uniforms, presented to them by Bethany herself.

“We could not be more proud of our crew… We’re super excited for them to be recognized,” said Fire Chief Ron MacKnight. “This is a clear indication of the positive impact running medical calls can have.”