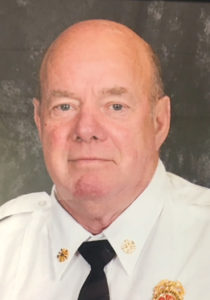 Chief Darryl Reed retires after thirty-three years as Fire Chief of the Mapaville Fire Protection District. Chief Reed started as a volunteer in 1983. The whole time he was with the fire district he was a volunteer.

Darryl worked for the Metropolitan Sewer District in St. Louis, Missouri, from 1985 until he retired in 2010.

He was very devoted and moved through the ranks to become chief in 1985. Darryl was instrumental on getting a FEMA grant to build a new fire house in partnership with Joachim Plattin Ambulance District. He also headed up getting full and part time paid firefighters.

He has been on the Joachin Plattin Board of Directors for fifteen years. He was also a combat veteran of Vietnam, 1967 through 1968. He attends his yearly unit reunion and participated in the Honor Flight in 2017.