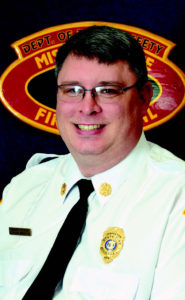 Robert was born November 11, 1972, to Wayne and Linda Dawes in Springfield, Missouri. He attended Walnut Grove schools where his mother was a school teacher for over 30 years, graduating in 1991.

Robert married his wife Carie in 1995 and moved to Blue Springs, Missouri, to start their family. He then attended DeVry Institute of Technology and received an associate’s degree in electronics in February 1999. He was hired right out of school and spent the next eleven years working as an elevator mechanic for General Elevator and Hydraulics Company in Lees Summit. Over the years Robert and Carie had three daughters. While working for the elevator company they moved to Stockton, Missouri, in 2004.

Robert began working for the Division of Fire Safety’s Elevator and Amusement Ride Safety program in 2010 and has proven to be a loyal and valuable employee. Fellow employees enjoy Robert’s positive attitude and good humor.
In April of 2018, Robert was asked to teach a three day elevator safety class to the Springfield Fire Department for elevator evacuation procedures. He was commended for the excellent job he did sharing his expertise and providing a hands-on presentation. The fire department was very pleased with his presentation. Since that time, several areas of the State have requested Robert’s presentation.

Robert and his wife are members of the Benevolent and Protective order of Elks which provides assistance for veterans and families in need.