During the classroom day, the students were given time to make a poster that used the theme “Every Second Counts,  Plan 2 Ways Out.” They were put into different age groups and judged at the firehouse. These were the six students that sent posters to be judged at the state level: 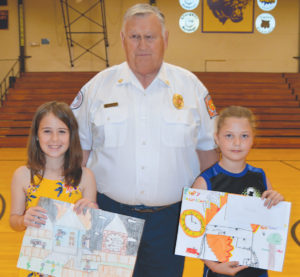 The Madison firefighters gave each of the winners a money award.

These six winners posters were taken to the 2018 Firefighters Association of Missouri’s Annual Convention in St Joseph. There were seven different departments throughout Missouri that took 66 posters total to the convention. Of all those posters, Madison had two winners in the top nine for the state. In the third and fourth grades, Annie Barton won first and in the fifth and sixth grades, Karlie McGee won third. These students will receive from the FFAM: a money award, free admission into the State Fair, a wristband pass to the midway carnival, and meals at the State Fair Fire Department cafeteria.

The Madison West Monroe Volunteer Fire Protection District want to thank all the teachers for taking time to have the students make their posters and the students that made the posters. The plans are to do this contest again next year.