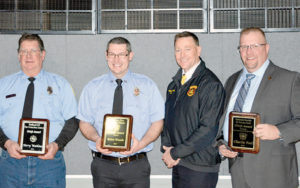 Local firefighters, supporters and friends attended the Randolph County Fire Departments Award Dinner on Saturday in Moberly, an event recognizing those men and women who work tirelessly to protect local life and property.

Captain Charlie Peel of Southeast Randolph County Fire Department said the event is a chance to show appreciation for all the brave men and women who sacrificed their time and often risk their own lives for local communities.

“We wanted to take a break to make the volunteer firefighters feel appreciated for what they do,” Peel said. “All these firefighters in the county do an outstanding job and we try to reward them in some way. We can’t do it monetarily, but we try to through these awards recognizing them for a job well done.”

Moberly Fire Chief George Albert said while the firefighters were honored to receive the various awards, recognitions is not something they look for in the course of their duties. 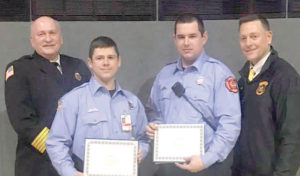 Moberly Firefighters Trevor Stein (left) and Ben Wolverton (right) receive the Life Safety Award presented by the City of Moberly and MFD. Both firefighters were involved in the September 17, search and rescue of a young female during a residential structure fire.

“Firefighters very seldom look for recognition or anything like that,” Albert said. “That is not what we do our jobs for, but sometimes it is nice to get a little pat on the back and hear someone say thank you for the service they do and the time they put in.”

Awards were presented to firefighters for community service, appreciation, firefighter of the year and the chief’s award.

Moberly firefighters Trevor Stein and Ben Wolverton were recognized with the Life Safety Award for their efforts in the search and rescue of a young girl during a September 17, house fire in Moberly.

According to reports, the firefighters entered the front of building and encountered heavy heat and smoke. They advanced to the kitchen where they approached heavy flames. Wolverton, while in the process of extinguishing the fire, was notified by Stein he found a victim and needed assistance. 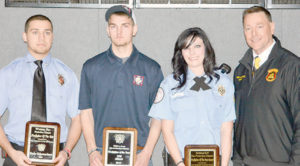 Firefighters moved the patient outside where other firefighters began medical treatment until paramedics arrived. The patient suffered from second and third degree burns, and smoke inhalation.