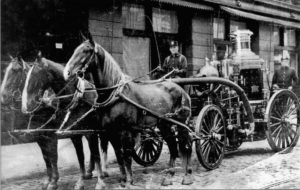 The St. Louis Fire Department was established in 1857 and is the second oldest career fire department in the United States. Prior to 1847 a number of volunteer fire companies were in service in the city, starting around 1822. Members of these fire companies came from all walks of life and the fire company member’s wielded considerable political influence. It was the pride and ambition of each fire company to be the first to reach the fire and the most efficient to extinguish the fire.

It was one of the first departments in the nation in 1926 to establish a fire department training academy to study fire and to train recruit firefighters. The department also took the lead in exceptional apparatus, being one of the first departments to purchase a 100’ ladder truck. In 1987 the department was the first in the nation to use a “Total Quint Concept”, combining the traditional fire pumper and hook and ladder into one piece of equipment. The first of 30 new Quint apparatus were placed into service in 1987 and 1988.

St. Louis was the prominent point and the Gateway to the West. In the Spring of 1849, the population of St. Louis was 45,000 with the western boundary of the city extending to Eleventh Street, about 3/4’s of a mile in width, by a riverfront of three miles.

On May 17 at 9:00 p.m. a fire alarm sounded. The steamer “The White Cloud” lying at the foot of Cherry Street was on fire. The Fire Department that consisted of 9 hand engines and hose reels promptly responded. The moorings parted and the steamer floated slowly down stream setting 22 other steamers on fire before the “White Cloud” reached the foot of Locust.

The flames leaped from building to building sweeping everything on the levee for four blocks; extending to Main Street westward and crossing Olive. It completely gutted three more blocks between it and Second Street and as far south as Market Street. It then ignited a large copper shop three square blocks away and burned out two more blocks. The firemen, after laboring for eight hours, were completely demoralized and exhausted. The entire business portion of the city appeared doomed unless something was done. Six buildings were spread with explosive powder and blown up in succession. Captain Thomas B. Targee of Missouri No. 5 died while he was spreading powder into Phillips Music store, the last store to be blown up.

This marked the largest and most destructive fire St. Louis has ever experienced. The fire lasted from 9:00 p.m. until 8:00 a.m., and caused the loss of three lives, 430 buildings, 23 steamers, 9 flat boats, and several barges. 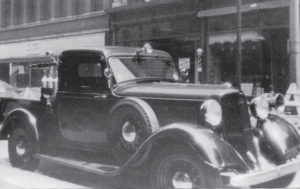 The success of inhalator crews in saving lives demonstrated the worth of this service. In 1928-29, the department responded to 75 calls with life-giving oxygen. This is a 1934 unit. In 1942 the inhalator cars left the fire department and were placed in the city’s hospital division.

In 1907 the fire chief received the first piece of motorized equipment, and in 1910 the first motorized pump was received. On March 9, 1914, Saint Louis suffered its worse loss of life when the Missouri Athletic Club at 4th and Washington caught fire and 30 men staying in the building perished in the blaze.

Beginning on July 16, 1926, the St. Louis Fire Department training school was organized under the leadership of battalion chief George R. Ward. In 1933, five engine companies were taken out of service, and on August 6, 1942, General Order Number 30 was issued with the subject of the reorganization of the St. Louis Fire Department. The department was divided into 9 districts with a battalion chief in charge of each district, 43 engine companies, 23 hook and ladder companies, 12 hose wagons, and a rescue squad. Also new running cards were made consisting of five alarms. The first five-alarm blaze occurred on December 11, 1942 at the Dye Candy Company located at 310 S 21st St. 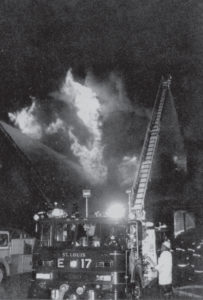 Engine 17, pictured here, was part of the St. LFD Total Quint concept developed by Fire Chief Neil Sventanics This company rescued a man from a burning roof shortly after being placed in service. It was the first Quint rescue after the concept was initiated.

During the start of World War II orders came from Washington, D.C. that Saint Louis must plan an auxiliary fire force. The fire chief called in some loyal fire buffs, including Phil Nauman to take over the huge task of training these volunteers. This program was called the United Stats Citizens Defense Corps and two of the jobs were auxiliary firemen and fire watchers. The auxiliary firemen had portable pumps mounted on trailers that could be hauled behind an automobile or truck.

Another interesting bit of history came to a close at the stroke of midnight on December 31, 1955 when the Underwriters Salvage Corps passed into history. They had served the city for 82 years, working alongside our fireman and dying with them in the line of duty.

In the 1980’s changes started to take place with the first women firefighters to join the fire department, and a new headquarters building was opened at Jefferson and Cass.

The City Ambulance Service (as it was then called) began its first series of two-man procedures in September 1971. The old red and white ambulance, under the guidance of the Health and Hospitals Division, was what the city depended on for emergency situations.

Having previously relied on the first aid knowledge of city police officers, most of the people who began then agree that the first training programs were anything but easy. They endured hours of study and training while continuing to work under the guidance of a senior partner whose only qualification was driver.

With one person driving the ambulance, seeing a need to thrive even further and in accordance with the State of Missouri, it became mandatory for all ambulance personnel to be qualified as licensed EMT’s. By the end of 1974, all ambulance personnel were required to complete a minimum of a 120-hour course in the care and transportation of the sick and injured. Re-licensing of EMT’s would be required every three years.

The following year saw even greater challenges: the birth of the first paramedic crews and the long overdue hiring of female employees.

Successfully making the transition in just a few short years, the new Emergency Medical Service expanded into full-scale operation from Life Support Units into enough to cover every police district in the city. One would have had to be involved 25 or more years ago to fully understand the revolution of the EMS services.

On April 19, 1997 EMS was incorporated into the St. Louis Fire Department, and renamed the Bureau of EMS.

The St. Louis Fire Department is recognized as a progressive leader in providing the highest quality of emergency services. They are committed to the preservation of life, property, and the environment by effectively and efficiently meeting the emerging public safety and welfare needs of their diverse community. They accomplish their goals by maintaining the highest standards of professional service through continued training, education, and living up to their motto of being “Justifiably Proud.”

The St. Louis Fire Department protects a city that covers approximately 62 square miles and has a population of approximately 319,294 full-time residents and a daytime population approaching 1,000,000.

The Fire Suppression Bureau operates three shifts, each commanded by a Deputy Fire Chief. Firefighters respond from 30 Engine Houses, located throughout the City, organized into six districts. Each district is commanded by a Battalion chief.