You are here: Home > 2018 FFAM Convention Awards and Recognition

The FFAM Awards Committee thanks everyone who submitted nominations for the 2018 FFAM awards which were presented on Saturday, May 5, in St. Joseph during the annual convention. The nominations which were submitted were all excellent nominations worthy of receiving recognition in their respective award categories. These awards provide an excellent opportunity to showcase and recognize great achievements by our members.

It was an honor for the awards committee to present the following awards for 2018:

In addition to these awards, the Fire Fighters Association of Missouri in conjunction with the Phil Sayer family, VFIS, and the Missouri Division of Fire Safety, awarded the 2018 Phil Sayer Lifetime Achievement Award to Brian Zinanni of the Clayton Fire Department. Brian has served the fire service for 32 years and currently serves the Clayton Fire Department as a Lieutenant/Medical Officer. He is the founder and state coordinator of the Missouri Fire Service Funeral Assistance Team and serves as an advisor to the Missouri EMS Funeral assistance Team and the Missouri Law Enforcement Funeral Assistance Team. Brian is a board member of the Firefighters Memorial Foundation of Missouri and Regional Director of the National Honor Guard Commanders Association. Brian is also the Missouri coordinator of Supporting Heroes, Inc. which is an organization dedicated to honoring the sacrifice and service of public safety heroes killed in the line of duty by caring for their loved ones left behind. 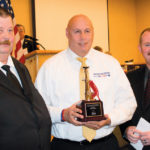 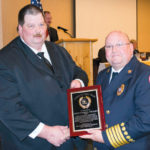 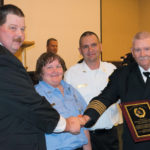 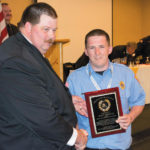 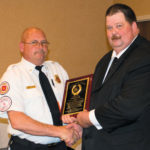 Brian consistently puts forth dedication and loving care towards the survivors and their families, long after the visitation and services have concluded. Not only has Brian made an impact in the everyday workings of the fire service but he is consistently impacting today, tomorrow and the unforeseeable future of the fire service and has made so many impacts in Missouri and across the United States that no one could thank him enough. His devotion and expertise has put the FFAM and our Missouri out front when it comes to the fire service and the National Fallen Firefighters Foundation throughout the nation.

On behalf of the Awards Committee, the Sayer family, VFIS and the Missouri Division of Fire Safety, we were honored to present this award to Brian.

For more information on the FFAM Awards available and the nomination process, visit www.ffam.org/awards.