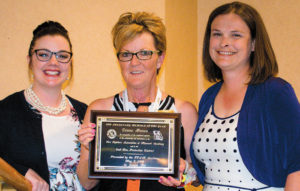 Meeting called to order by President Diane Hanes at 9:05 a.m. Colors were posted, and the Pledge of Allegiance was said. Chris Slaughter, Warrenton FPD, read the invocation, The Fireman’s Wife Prayer.

Jessica Miller, Norborne FPD, explained the voting procedure on the election of officers.

Past presidents were invited to stand and introduce themselves, Kim Voss, Beaufort-Leslie FD and Chris Slaughter, Warrenton FD.

Sheri Berendzen, Cole Co FPD, reported as of May 4-6, 2018, the Auxiliary has $6,770.43. The fund raisers we held this convention consisted of a quilt we raffled off and that brought in $160. We held silent auctions and that brought in $1,639. And we also had a booze raffle which brought in $807. Diane Hanes, Galt FD, asked for any corrections, additions or any discussions. Chris Slaughter, Warrenton FD, made a motion to accept the treasure report with a correction to the report (the date read 2017) that was read. Second by Jessica Miller, Norborne FPD. Diane Hanes asked all in favor, no opposed, motion passed.

Chris Slaughter, Warrenton FD, and Kim Voss, Beaufort-Leslie Fire, read the officers nominated and there were no nominations from the floor.

Theresa Cox, Wentzville FPD, reported that we have 136 paid members with one new membership she is from Southern Holt. There are also ten honorary members. Theresa Cox past around lists of long standing, honorary, past presidents and other lists she has been working on updating. Asked if anyone has more additions or corrections to let her know. Also explained on how the name of the auxiliary has changed in the past years.

Jessica Miller, Norborne FPD, reported games went well and everyone had a good time. The weather was decent. The games ended about noon. If anyone want to share pictures they have taken, please let us know. We need more ladies’ teams.

Chris Slaughter, Warrenton FD, stated she has started a web page album of pictures she has been taking. If anyone has pictures they would like to share, please let her know.

Ann Jones, Madison West Monroe FD, was absent. There are no by-law changes at this time.

Auxiliary of the Year

This year the award went to Diane Hanes, Galt FD. Christina Loyd, Little Dixie FPD, spoke about the award and that nominations are accepted from January to December and the form is on the web page. The award can also be a department auxiliary besides just an auxiliary member. Diane Hanes spoke about her receiving the award.

Diane Hanes, Galt FD, talked about how the posters need to be received by 7:00 p.m. on Friday night. We had very good posters submitted, and the judges had a very hard time judging the posters. The size and weight are what get posters disqualified mainly, the rules for the contest are on the website. There were 66 posters from 7 departments received. The total received was down in the count from the past years. Robert Brown (RB), District 7 Director, oversees the poster contest and he is the one in charge of rules for submitting the posters, the auxiliary is only doing the judging.

Diane Hanes, Galt FD, reported on the services, the Candlelight Service will be Saturday, May 19, at 8:30 p.m., and the Memorial Service will be Sunday, May 20, at 10:30 a.m. These services will be held at the Kingdom City Fire Fighters Memorial. Galt will be doing the ribbon again. The services are very memorable and well attended. If the weather calls for rain they have other arrangements made.

During the break cash door prizes and jewelry were given away.

There was no old business to report on at this time.

Kim Voss, Beaufort-Leslie Fire, is to swear in the new officers. Carrisa Mueller, Holts Summit FPD, made a motion to accept the list of officers submitted. Second by Reta Smiley, Galt FD. Diane Hanes, Galt FD, asked all in favor, no opposed, motion passed. Kim Voss swore officers in and presented the 2018-2019 officers to the members.

Jessica Miller, Norborne FPD, made a motion to adjourn the meeting, seconded by Rebecca Jackson, Galt FD. All in favor, motion passed.