You are here: Home > New Chief at Cedar Hill FD 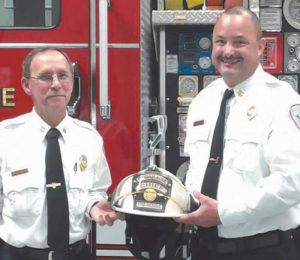 Fire Chief Terry Soer retired after more than 45 years of service. Terry started as a volunteer in 1972 where he served as a firefighter. He was hired full time by the district where he served as firefighter, lieutenant, fire marshal, and became the districts first full-time chief on January 1, 1991. He officially retired on January 1, 2018. Terry will be employed by the district until December 2018 serving as a consultant to the new fire chief. The fire district named Lieutenant Mick Fischer as the new fire chief. Mick started with the Cedar Hill Fire Protection District in 1994 as a volunteer firefighter. He was hired as a full-time firefighter in January 2002 where he worked his way up to the position of lieutenant before being promoted to fire chief. Chief Mick Fischer officially took over as fire chief on January 1, 2018. The Cedar Hill Fire Protection District would like to thank Chief Terry Soer for his many years of service and dedication.