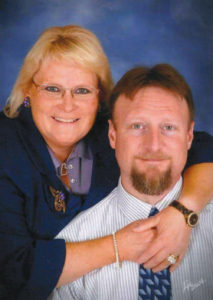 Shane and Vicki Bullock have been married 17 years and share a love for God, family, friends, hobbies and church.

Shane has been in some aspect of the fire service for over 28 years. He began as a Junior Firefighter in High School and successfully climbed the ranks from “go-for” gopher to Lieutenant, from Training Officer to Chief. In the beginning, he served in many capacities for the Belle Volunteer Fire Department with over 274 square miles as his responsibility when he also became one of the youngest Fire Chiefs in the State of Missouri.

Vicki and Shane have a passion for preserving the history of firefighting and have a vast collection of fire memorabilia including a fire hose cart from the mid 1800’s, which has 7 foot tall wheels. They have everything from leather fire buckets to hydrants, from helmets and proximity suits to fire grenades. They recently acquired a 1948 American LeFrance Open Top Pumper Truck they are working on to make “Parade-Ready” so they may share its great history with others.

When it comes to history, it doesn’t stop with firefighting. Vicki and Shane also love the history of the old West. They participate in a cowboy reenactment group called the South Fork Regulators and perform historical gunfight skits at area festivals, including the, Walk Back in Time, historical event in Mexico, Missouri. This is a three day event where their group sets up an entire town complete with a jail, saloon, telegraph office, corral, shower house and a mercantile/general store. Vicki and Shane play the part of Miss Annie and Seth.

They sell their handcrafted leather and jewelry items in “Bullock’s Mercantile” and share the history of what a cowboy could purchase in the store from the 1860’s to approximately 1899 that we can also purchase today. Shane and Vicki also entertain the crowd between gunfights with bullwhip skits and tricks. Talk about trust in your partner! Vicki holds a balloon for Shane to bust with the bullwhip!

Shane makes all of Vicki’s costume wear and most of his, while Vicki makes all of her period jewelry. Shane also makes his holsters and other leather cowboy items.

Vicki and Shane share their fondness for leather crafting and make the items they sell in their Mercantile and at local craft shows. Vicki’s father taught her at a very young age about the art of leather crafting, and then shared the craft with Shane about 16 years ago. They have also taken their love for the art and are passing it on to a group of students at a local Christian School to children ages 9 to 16.

Carrington Baptist Church is where you’ll also find Shane and Vicki much of the time as Shane serves as a Trustee and Sound Technician and Vicki is the Music Director. They are in charge of the 9/11 Memorial Service and serve on many committees. Vicki also shares her music talents by sharing in the special music for many services.

Vicki spends many of her days helping others through the faith-based non-profit she founded in 2010. The Redeem Project Ministry is a social service agency that helps others who sometimes just need a second chance. “Because every life counts and no life is beyond redemption,” is their motto and they never turn anyone away. Vicki is proud of the fact The Redeem Project Ministry allows 100% of all donations to go to the program the donor wants their donation to go to help. Not one cent goes to administrative or operational costs. How many charities can say that?

Two of the larger programs they run are the Family Self-Sufficiency program in collaboration with the Housing Authority of the City of Jefferson where they work with those in section eight housing and work with them to become self-sufficient and get completely off government aid. This program has been very successful!

The other big program is called, Hope for Christmas. In this program, they help families that “fall between the cracks” at Christmas, that wouldn’t qualify for help from other agencies because they are like you and I. They work every day, but because of some traumatic event in the last few months, they are unable to provide Christmas for their family. These families are referred by their doctor, churches, funeral homes, etc., because they are dealing with death of a parent or child, cancer, etc. They are helped only one year and the entire family is taken care of, not just the children. Each family is given a family Bible and each child is given an age-appropriate Bible as well as many gifts from families, individuals, offices, and others that adopt them through this program. These are people that work in the next cubicle to you, sit next to you in church or may those that attend the same ballgames as you. They are you and I, and our neighbors, and through this program, they receive hope for Christmas.

This is Vicki and Shane Bullock in a nutshell. They stay very busy and enjoy serving others in every opportunity placed before them. They don’t do it for accolades or to be noticed, they do it because, “…much has been given to them…,” and they want to give back and pay it forward.