You are here: Home > Honoring LODD 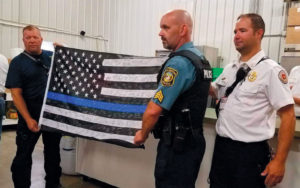 At the meeting of all personnel on August 19, 2017 we gathered to honor the Clinton Missouri police officer who lost his life in the line of Duty, Officer Gary Michael. His Road Sergeant, Chad Nepple represented the Clinton Police Department for the presentation. We gave the family a firefighter flag that was signed by Law Enforcement, EMS, Fire, Conservation and State Officials at the 2017 Missouri State Fair to honor his ultimate sacrifice. He lost his life on August 6, 2017, during a traffic stop.