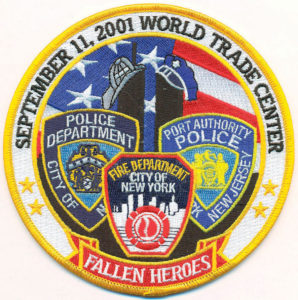 To some folks that experienced this day in 2001, it seems like yesterday; to others a fleeting memory. It is also astounding to me that there are kids in our country that are now driving age, including my youngest grandson, who were not even born when this attack on our country occurred.

It was the first foreign attack on the United States mainland in almost two centuries and the largest firefighter life loss ever in one incident. Three hundred forty three firefighters and officers of the New Your City Fire Department died as a result of American Airlines Boeing 767 loaded with 20,000 gallons of fuel struck the 80th floor of the North tower of the World Trade Center. Eighteen minutes later a second Boeing 767, United Air Lines flight 175 slammed into the 60th floor of the South Tower!

Over three thousand people lost their lives that day in the attacks on the World Trade Center in New York and the Pentagon in Washington D.C when American flight 77 crashed into military center of our country, killing 125 military personnel and civilians.

Everyone alive that day also remembers the hero’s of United flight 93 that teamed up to attack their hijackers that forced the plane down near Shanksville, in southwestern Pennsylvania.

For those of us that have been around for a long time, and I definitely fall into that group, this day falls into the same category as the day that John Kennedy was assassination in Dallas and some older folks than me, Pearl Harbor.

The long-term effect of what happened that day sticks with me and is in my thoughts frequently. If you consider just the life loss of the 343 fire personnel in the FDNY, there are hundreds of family members who are without their firefighter husband, father, uncle, grandpa and other relations, along with good friends.

The years of experience and training went with these brave souls when they worked at the base of huge buildings that no one in the world would ever think would just collapse and fall on you!

If you take a look at just one of these lives, you get the idea of what I mean and the scope of this long-term loss.

This bracelet has been worn by my son, Assistant Chief Doug Westhoff – Boone County Fire District for the last fifteen years as attribute to his mentor, Chief Ray Downing. Doug was a new Task Force leader for MO Task Force One when they worked together at task force leaders meetings around the country.

Deputy Chief Ray Downey was in charge of Special Operations Command that day and was at the command center at the base of the towers. He was also one of the founding fathers of the FEMA Urban Search and Rescue Team network. Take a look at what the National Fallen Firefighters Foundation had to say about this outstanding fire officer and then multiply that loss 342 more times for the other members lost from just the FDNY organization. This is why we do memorial stair climbs and wear memorial bracelet’s to remember these folks! May they never be forgotten.