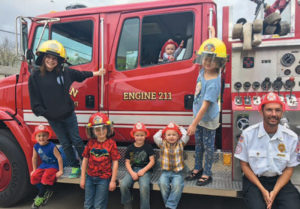 We received our newly refurbished truck back in February 2017. Our truck went to Precision Fire Apparatus in October 2016. Holden Volunteer Fire and Rescue would like to give a big thanks to the citizens of Holden for our newly refurbished fire engine and the new life safety equipment purchased by the bond that you all passed back in April 2016.

Thanks again to Precision Fire Apparatus for the truck that was loaned to us during the refurbishment project. During that time we had many things repaired, like the removal of rust, a new paint job and many other safety features we previously were lacking. We were also able to update and replace multiple pieces of life safety equipment and bunker gear keeping our firefighters and loved ones out of harm’s way. In gratitude we had an open house on March 30, were we invited the citizens of Holden to come out and see the new updates on the truck and to meet our Firefighters.

On April 22, our firefighters were part of an Inspire 5K Walk/Run that supports our local youth. Inspire is a school organized group that helps bring awareness about bullying, depression, eating disorders and suicides. What a great cause to be a part of in our local community.