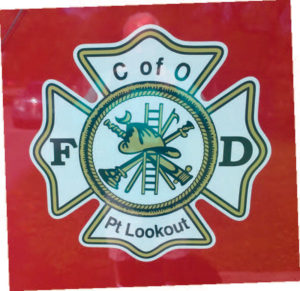 Founded as the faith based School of the Ozarks in 1906, the institution was formed to provide primary and secondary education to children in the hill country of the Ozarks without sufficient means to procure such training. The school was the dream of a young Presbyterian Minister by the name of Reverend James Forsythe.

His dream continued to grow over the years and in 1956, a two-year Junior College was added. In 1990 the Board of Trustees voted to change the name of the institution to “College of the Ozarks” and since then the programs and facilities have grown to become one of the leading educational institutions in the nation. 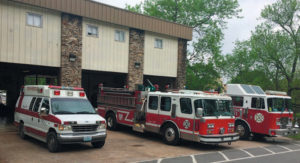 The present fire station for the College of the Ozarks Fire Department is located on the campus. Ten of the thirty members of the department reside in the station and available for emergency responses. Two engines and a new squad unit are housed here.

The term, “Hard Work U” is not just a saying thrown around the campus lightly. The school is unique in that every student has a work assignment that pays his or her tuition for their education. Grounds keeping; tending the college’s massive dairy herd, including milking cows; house-keeping and running kitchens/waiting tables and any number of jobs you can think of are all done by students. The College operates a tourist attraction called the Keeter Center, which is recognized as the #1 small hotel in the nation. Every worker in that facility that you interact with as a customer will be a student. 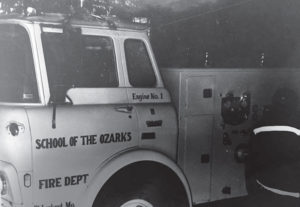 Sometime in the early forties the school determined that there should be better fire protection for their growing investment than local organizations could provide. Point Lookout is actually in or very near the town of Hollister and the volunteer fire department consisted of one engine and a hand full of volunteer firefighters. Branson is the next community near the campus with about the same capability as Hollister.

My first experiences with the fire department at the College of the Ozarks was in the early to mid sixties when I was a traveling field instructor for the University of Missouri Fire Training program. I was impressed with the quality of students and the warm welcome of the entire campus. As a representative of the university, I was provided lodging in the guesthouse on campus, with its beautiful view on the bluff overlooking Lake Taneycomo. The best memory of all was an invitation to breakfast with the then President of the school, Dr. M. Graham Clark.

As time passed, one of the first firefighter one certification classes taught in the state was conducted at School of the Ozarks in the early seventies. By that time, we were using field instructors from local fire departments and Captain Bob Hasbrook from the Neosho Fire Department was the lead instructor. Bob later became the Chief of the Western Taney County Fire District and recently retired as the Chief of the Bartlesville, Oklahoma Fire Department. In my book, he was one of the best instructors in the business and I will always consider him a close associate and friend. 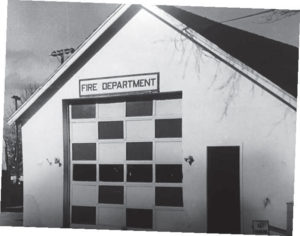 School officials through the years have always been willing to allow the fire department to respond to emergencies on and off campus. Prior to the formation of tax supported fire districts in Stone and Taney counties many areas had limited protection from community fire departments and in many instances relied on assistance from student firefighters and their apparatus provided by the school.

AND THE TREND OF EXCELLENCE CONTINUES

The current fire department staff and the leadership provided from on and off the campus are allowing fire protection and safety to become a high priority. College of the Ozarks has recently announced the development of a fire science major as part of their department of public safety education. See the individual article later in this newsletter with more details of this program.

Doctor John Russo, associate professor of fire science heads the program and is the faculty advisor to the fire department. Russo is dual certified as a firefighter and police officer and brings thirty-one years of experience to the campus. His experiences as both a volunteer and career firefighter, EMT, rescue diver, fire marshal and police officer, as well as an instructor at various technical colleges, makes him an asset to the program.

The Fire Chief of the College of the Ozarks Fire Department, Dalton Pennington and Captain Ryan Wood are both enrolled in the new program and plan to continue a career in the fire service upon graduation. Dalton is from Springfield and was originally in enrolled in the law enforcement program but changed majors when the fire degree became available. Ryan is a natural for the program, having grown up in a fire family. His Dad, John Wood retired from the Columbia, MO Fire Department. John and I worked together there and I have the greatest respect for him as a firefighter and a father. 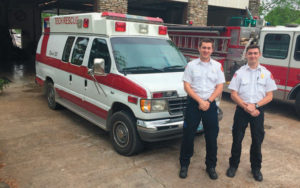 Fire Chief Dalton Pennington and Captain Ryan Wood shown here with the department’s newly acquired “Squad” unit. The rig was a gift to the college from neighboring Southern Stone County Fire Protection District. The gift from that department illustrates their motto painted proudly on all the Southern Stone apparatus “Neighbor’s helping Neighbor’s”.

Recently, I visited with Chief Chris Berndt of the Western Taney County Fire Protection district concerning their interaction and involvement with the fire department at College of the Ozarks. The Western Taney Fire District completely surrounds the campus and covers 212 square miles of the western portion of Taney County. It also completely surrounds the City of Branson.

The concept of flying manpower squads is a long-standing tradition in the fire service. In the most current issue of Vintage Fire Truck and Equipment magazine there is an excellent article by Walt McCall stating the Springfield Massachusetts Fire Department placed the nations first flying manpower squad in service in September of 1906. The vehicle used was Knox squad car built by the local Knox Automobile Co. and carried eight firefighters and a Battalion Chief. In 1908 the Detroit Fire Department followed placing a Packard squad car in service. The members of this elite unit were known as “squad men” and were paid $80 a year more than engine and truck men.

The Winsor Fire Department, across the river from Detroit followed in 1930 with a unit nick named “The Bug” because it always seemed to be everywhere. Winsor kept their flying manpower squad concept for more thirty years. It may just be me and my concern for things history related, but I think a really good name for that new squad at the C of O would be “The Bug”.

On my last visit to the campus, I was treated to a demonstration that illustrates the forward thinking of our young fire personnel who are rapidly replacing the old dogs.

Behind the fire station Chief Pennington and Captain Wood gave me a quick demonstration of the Chief’s personal drone. The applications for this innovative tool for search and rescue, as well as fire scene use are endless.

This June Dr. Russo, Chief Pennington and Captain Wood have been invited to the National Fire Academy to present a program illustrating the drone use in emergency services.

How is that for the most unique fire department in the State of Missouri? 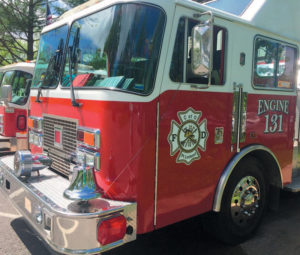