You are here: Home > City of Riverside Press Release 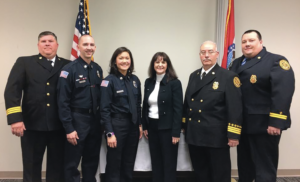 Since 2012 Greg Mills has held two different positions with the City of Riverside: as the Director of Public Safety, a position he assumed in 2005; and Riverside’s City Administrator. In 1975 Riverside established the Department of Public Safety, which had police officers dual trained as fire fighters. No longer a safe or efficient model for providing for the public safety, in 2008 Riverside established a separate fire department, with Mills leading both police and fire. Over the next several months Mills will transition to retirement and in preparation for that Riverside’s Board of Aldermen has eliminated the position of Director of Public Safety and has selected a Police Chief and a Fire Chief. These two people will be officially sworn in at the March 7th Board of Aldermen meeting, which begins at 7:00 pm at Riverside’s City Hall.

To be appointed as Chief of Police is Riverside Police Major Chris Skinrood. Major Skinrood was hired as a Reserve Public Safety Officer in June of 1995 and became a full time officer in October of 1995. Since then he has risen through the ranks being promoted to Patrol Sergeant in 2005, moved to the Administrative Sergeant’s position in 2008, and promoted to the position of Captain in 2009. In March of 2013, he was promoted to the rank of Major. Major Skinrood is responsible for the daily operations of the police division, including, budgeting, patrol, communications, and the Criminal Investigation Unit. He is a member of the Metro Squad and the Metropolitan Area Regional Radio System Committee.

To be appointed as the Riverside Fire Chief is current Fire Division Chief Gordon Fowlston. Chief Fowlston was hired as Riverside’s Fire Marshal in 2007 and was promoted to Fire Division Chief in 2008. He has been responsible for the daily operation of the Fire Division and with this promotion will be the first Fire Chief of a standalone Riverside Fire Department. He has 26 years of firefighting experience and holds a Bachelor’s Degree in Fire Administration. Chief Fowlston is active in many national and local organizations, to include the International Association of Fire Chiefs, Missouri Fire Chiefs, the National Fire Protection Association and the Missouri Fire Service Funeral Team. 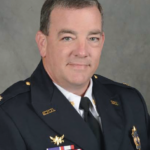 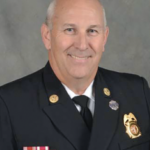