You are here: Home > JCFPD Personnel Recognized for Their Service 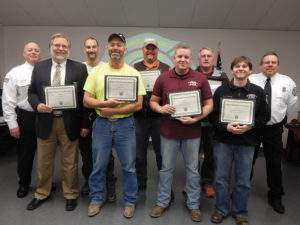 On Tuesday, December 13, 2016 the Johnson County Fire Protection District recognized nine of their members in honor of milestone anniversaries or service to the District. A reception honoring the group was held following the regular board of directors meeting. Those honored were: 5 years – Donald Bowers, Travis Reid, Stacy Solsberry and Joshua Teaney; 10 years – Nathan Deuschle and Matt Owsley. Steve Runyon was recognized for his 15 years of service and David Short was recognized for 20 years of service. Chuck Heiss was honored for his retirement after 23 years of service, but he was not able to be present for the ceremony.