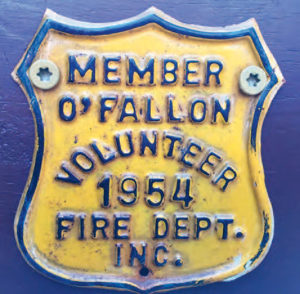 When I was a young lad growing up in O’Fallon I had several opportunities to accompany my Dad to fire schools and other fire meetings in St. Louis County. I noticed when attending these meetings that several staff vehicles had license plates that used the letters F.P.D after the name of the organization. I was considered a rather bright child, but those abbreviations were confusing to me and at first I thought this was some kind of combined fire and police unit. Keep in mind that this was the 1950’s and I was not yet a “teen know it all.” So, when you don’t know something, you ask your Dad. The first thing he did was chastise me for being so “damn dumb” and not looking at the lettering on the door of the vehicle because there it clearly spelled out that this was the fire chief’s staff vehicle from the Mehlville Fire Protection District. This was my very first lesson learning about fire districts in my home state. Little did I know at the time that I was destined to spend most of my life dealing with fire districts and fire departments.

The original statute that created fire protection districts in Missouri was passed in 1947. The legislature at the time assumed that the only place the fire service needed to be improved was in first class counties which was the reason I saw so may different fancy fire district staff cars at meetings in St. Louis County. Currently there are 23 fire protection districts and 20 municipal fire departments in St. Louis County. END_OF_DOCUMENT_TOKEN_TO_BE_REPLACED 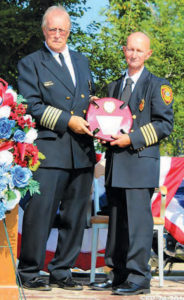 Over sixty-five fire trucks and ambulances ascended on the Herculaneum City Park on Saturday, September 24 to take part in the 23rd Annual Jeffco Fire Engine Rally sponsored by the Jefferson County Firefighters Association. The fall weather was absolutely gorgeous, but hot, and the event attracted firefighters, children and festival-goers from across the state. The 23rd rally followed in the footsteps of its predecessors by once again being a very successful event. 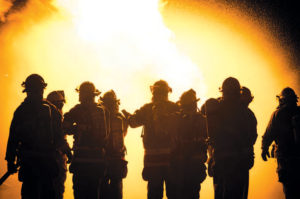 The Fire Fighters Association of Missouri and the Missouri State Fair Fire Department (MSFFD) hosted a no cost, two-day training in cooperation with the City of Sedalia Fire Department, Pettis County Fire Department, National Propane Education and Research Council, Missouri Propane Education and Research Council, University of Missouri Fire and Rescue Training Institute, and the State of Missouri Fire Marshall’s office for firefighters at the Missouri State Fairgrounds firehouse. EMS equipment and an ambulance were furnished by the Higginsville Fire Protection District, Higginsville EMS and Wellington Fire Protection District for rehab and on scene medical care.

The trainers instructed twelve hours of classroom training on how to handle propane emergencies to assist the firefighters on scene and eight hours of hands on firefighting skills dealing with propane fires and vehicles. The bobtail delivery vehicles were used for vehicle familiarization if an emergency occurred and were furnished by Heet Gas Company of Cole Camp and MFA Oil Company of Warrensburg. These companies also fueled the live fire training props with propane for the exercise.

Live fire props of a domestic propane tank and bobtail were used for the live fire training. Basic propane equipment and parts were used to assist in building firefighter knowledge and awareness when arriving on the scene. Several industry experts were on hand for questions and instruction during the evolutions of live fire training. END_OF_DOCUMENT_TOKEN_TO_BE_REPLACED

The National Volunteer Fire Council  (NVFC) Fall Meeting was hosted by the South Carolina State Firefighters’ Association in North Charleston, SC, on September 21-23 with 43 of 49 States represented, there are no volunteer fire departments in Hawaii. Several states included their director and assistant director, having 81 of 98 representatives in attendance. This Fall meeting was attended by Missouri Director Keith Smith and Assistant NVFC Director Greg Wright, who is also the district 2 director for the FFAM.

Opening and welcome by various South Carolina fire agencies, local and regional dignitaries and special guests. Reports from the NVFC executive staff and executive committee officers. Our President Kevin Quinn (RI) was not able to attend due to by-pass surgery the week before. Vice President Steve Hirsch (KS) facilitated the Fall meeting.

All organizations are recommended to have a 1-3-5 year road map but of late, experts caution about going to 5 years. With the fire service, economy and technology constantly changing and expected to continue as such, the emphasis is on the 12 months in front of your organization with a firm grasp on the 24 months which follow, 3 years total. Good advice for sure but being able to measure the goals in the plan while forecasting change are the current rules of engagement. The following information may be able to assist organizations through growth, attempting to improve their service positions or just tweaking a few things of interest. These are a few highlights from the NVFC Strategic Plan. END_OF_DOCUMENT_TOKEN_TO_BE_REPLACED 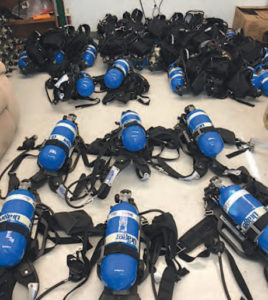 Time efficient, frugal and life-saving — those are a few of the reasons why Highlandville Rural Volunteer Fire Department recently updated its breathing apparatus and purchased a new brush truck. Both are developments Deputy Chief Adam Gilbert said were overdue and will benefit the department exponentially.

The department formerly used Scott packs since its inception 20 years ago, Gilbert said. The cylinders were at the end of life, and Stephens said the department debated refurbishing the old packs or purchasing new ones.

Purchasing new cylinders costs $15,000-$20,000, Chief Kevin Stephens said. The department would have to replace another set in two years and another in four. So, he said, the department decided purchasing new packs with updated, working equipment was more economical. END_OF_DOCUMENT_TOKEN_TO_BE_REPLACED 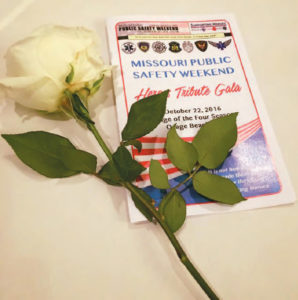 A few tears were shed, a few smiles were shared, and many hugs were exchanged, at the Missouri Public Safety Weekend Heroes Tribute Gala held Saturday night, October 22. Nearly 100 public safety individuals, family members and survivors, all gathered at the Lodge of Four Seasons in Osage Beach to honor Missouri public safety individuals who gave their lives in the line of duty.

A prayer started off the evening and the posting of colors was done by the Missouri EMS Funeral Response Team Color Guard. The national anthem was performed by professional trumpet player Stephen Wright of Chicago, IL. A roll call of heroes, honoring 14 public safety individuals, that gave their lives in the line of duty in 2015 and 2016 were read. As each name was read, a candle was lit in their honor by members of the fire, law and EMS funeral response teams.  At the end of the roll call, three additional candles were lit; one for EMS, one for fire, and one for law enforcement, to honor all public safety individuals in Missouri that have given the ultimate sacrifice. END_OF_DOCUMENT_TOKEN_TO_BE_REPLACED

In commemoration of the fifteenth anniversary of September 11, 2001, the Herculaneum Fire Department held a memorial observance on Sunday, September 11, 2016. The public memorial was held at the Herculaneum High School Theater with an attendance of approximately 250. A collection of 9/11 memorabilia was on display in the lobby of theater before and after the memorial program.

Following the opening remarks by Herculaneum Fire Chief Bill Haggard, the Special Needs Boy Scout Troop 724 of Kirkwood, Missouri, posted the United States flag and the POW flag. The Pledge of Allegiance was recited by the audience and Shannon Coaley sang The Star Spangled Banner. Members of the Herculaneum Fire Department presented a 9/11 memorial wreath accompanied by bagpiper Ian Ebrecht.

Pastor Terry Crank of the Heart of the Apostles Fellowship in Herculaneum delivered an opening prayer. Captain Phil Wilson read a 9/11 memorial proclamation from the fire department and Firefighter Kevin Perry read the poem,  Towers of Life. END_OF_DOCUMENT_TOKEN_TO_BE_REPLACED

“It’s all about maintaining focus.” Words recently spoken in a conversation I was having with a friend. Maintaining focus is often difficult. Life has many distractions.

Just last week, there was an extremely important issue concerning home sprinkler systems and a vote to keep them in the residential code. As I support the use of residential sprinklers for many reasons including not only their life safety benefits to the occupants of a home, but also as they relate to the safety of our firefighters, I was trying to maintain focus on the effort to keep residential sprinklers where they belong in the code.

But, with conducting interviews for positions within the Division, making a trip to the Kansas City area to address a recruit class and some fire chiefs, dealing with elevator rules, working on an Assistance to Firefighters Grant, a meeting at the lake and trying to prepare for a brief visit with our children over the weekend; I lost focus on the sprinkler issue. Fortunately for us, Missouri’s fire service and sprinkler advocates were there to step in and successfully champion the cause. END_OF_DOCUMENT_TOKEN_TO_BE_REPLACED