In commemoration of the fifteenth anniversary of September 11, 2001, the Herculaneum Fire Department held a memorial observance on Sunday, September 11, 2016. The public memorial was held at the Herculaneum High School Theater with an attendance of approximately 250. A collection of 9/11 memorabilia was on display in the lobby of theater before and after the memorial program.

Following the opening remarks by Herculaneum Fire Chief Bill Haggard, the Special Needs Boy Scout Troop 724 of Kirkwood, Missouri, posted the United States flag and the POW flag. The Pledge of Allegiance was recited by the audience and Shannon Coaley sang The Star Spangled Banner. Members of the Herculaneum Fire Department presented a 9/11 memorial wreath accompanied by bagpiper Ian Ebrecht.

Pastor Terry Crank of the Heart of the Apostles Fellowship in Herculaneum delivered an opening prayer. Captain Phil Wilson read a 9/11 memorial proclamation from the fire department and Firefighter Kevin Perry read the poem,  Towers of Life. 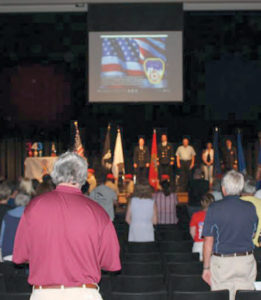 Audience participates in the Pledge of Allegiance.

The 9/11 memorial address titled, Remember the Fallen was delivered by PIER Officer Ron Harder of the Rock Community Fire Protection District in Arnold, Missouri. A 9/11 remembrance video, produced by Captain Kevin Baker, was shown to those in attendance. Both the memorial address and the remembrance video focused on the 343 New York City firefighters who perished during the attacks on the World Trade Center. A small United States flag with the name of a FDNY firefighter was given to everyone in attendance. The attendees were encouraged to the put the name on their flag with a face, as photos of all 343 firefighters were included in the video.

Firefighter Kevin Perry then read the poem, We Shall Never Forget. After the poem was read, a moment of silence was held followed by the symbolic bell ringing in a 3—4—3 manner. Following the indoor presentation, attendees assembled outside the theater for a candlelight memorial that included the playing of Amazing Grace on the bagpipes, a closing prayer and the singing of God Bless America.

Light refreshments were served following the observance. The Herculaneum Fire Department thanks the Senn-Thomas Middle School Community Service Club for helping distribute the flags, candles and programs. Members of the Herculaneum Historical Society and Herculaneum Today and Tomorrow served the refreshments. 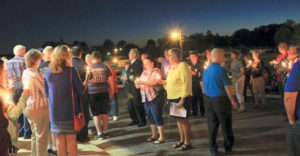