On October 15, 1977 at 1800 hours the Osage Beach Volunteer Fire Association responded to a report of a structure fire on Highway KK and LR 189. The structure was reported as unoccupied with the area of origin being a bathroom, the form of ignition a match and material ignited hay. The fire report went on the call the ignition factor of the fire “incendiary.” By definition incendiary is “causing or designed to cause a fire”, thus intentional. This report was written by Ed Anderson and the officer in charge approving the report was Pat Bagby, the Assistant Fire Chief.

Some 6 years earlier President Richard Nixon assemble a panel to look into the alarming fire problem in the United States. This commission went on to publish America Burning in 1973, a topic we covered last year. One of the recommendations of this panel was the establishment of a National Fire Academy to provide training to the countries firefighters. In 1974 President Gerald Ford signed Public Law 93-498 creating the United States Fire Administration and the creation of the Academy. In 1979 the USFA purchased the former Saint Joseph’s Academy, a Catholic School for girls from 1809-1973, for the purpose and use of the academy. The academy is located in Emmitsburg Maryland not far from several well-known sites, Gettysburg and Camp David. END_OF_DOCUMENT_TOKEN_TO_BE_REPLACED

Hello to all, I can officially say summer is here. Please take care of yourself when the temps and the humidity are high and drink lots of water. With the summer solstice behind us and the dog days of summer ahead, that means the Missouri State Fair is getting close, August 11-21.

All the poster contest winners are invited to attend the Missouri State Fair, August 12-14 and August 19-21, to have fun. If the fire districts or department have winners, please extend this invitation to the artist and contact the fire prevention chairperson by the end of July with arrangements. The winner will get into the fairgrounds, a pass to the midway and will receive the prize money. I hope to see all the winners at the Missouri State Fair. END_OF_DOCUMENT_TOKEN_TO_BE_REPLACED 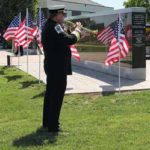 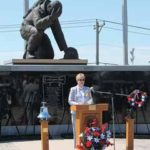 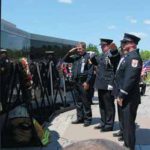 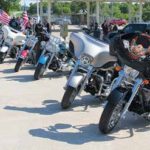 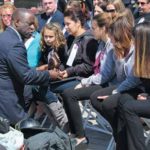 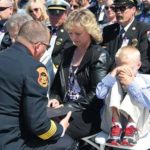 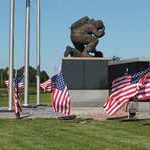 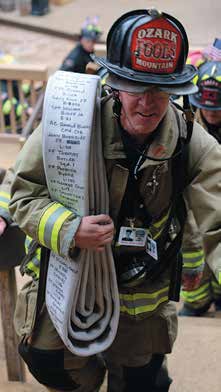 As our nation approaches the 15th anniversary of September 11th, when 343 American heroes lost their lives in the line of service in New York City, here’s your chance to show others that the phrase “Never Forget” is more than a slogan. Back up those words and join the hundreds of Southwest Missouri Firefighters and the National Fallen Firefighters Foundation (NFFF) on Sunday, September 11, 2016 for the Springfield Area 9/11 Memorial Stair Climb at Silver Dollar City.

Participants will climb Echo Hollow Amphitheatre multiple times for a total of 110 stories, representing the number of floors in the Twin Towers of New York City. Registration is $35.00 and is open to the public at www.springfieldmemorialstairclimb.org. Everyone will receive a photo ID of one of the fallen heroes of September 11. Check-in starts at 7:30 a.m. at the entrance to Silver Dollar City and the climb starts at 8:30 a.m. Admission to Silver Dollar City (SDC) for firefighters and season pass holders climbing will be free of charge. All other climbers will need to purchase a ticket to SDC for a special reduced rate of only $30.50. These tickets must be purchased at the gates the day of the climb and will only be available for purchase at Silver Dollar City ticket booths. END_OF_DOCUMENT_TOKEN_TO_BE_REPLACED 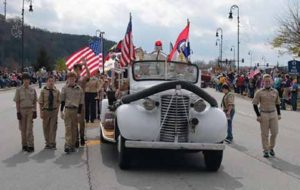 Veterans Day Parade in Branson with Scout Troop and the 1939 Chevrolet Central Apparatus. Three of my grand sons are in this troop and my son in law is the Scoutmaster.

I have a next-door neighbor, Chris Ely, who is a Branson firefighter and an avid collector of all things old and fire related. I’m fairly sure that is why he likes me! He came over a couple of months ago to show me a new fire publication that he was receiving called “Vintage Fire Truck”. Having somewhat of a passion for old fire “stuff” myself, I immediately took out a subscription. After receiving a copy or two, I thought it would be fun to write about antique fire apparatus and several have come to mind. Over the last several years most of my article have been about people and places in the fire service and now we can check out some “things” in the form of apparatus.

Our family has owned a 1939 Chevrolet /Central open cab pumper since we purchased it from Montgomery City Missouri in 1978. Some of our kids have been married on it, and it has been the centerpiece for lots of parades and weddings, as well as a couple of funerals over the years. Our grand kids have gone to forth of July celebrations on it and most recently the transportation of Scout troops for the annual Veterans Day Parade here in Branson. END_OF_DOCUMENT_TOKEN_TO_BE_REPLACED 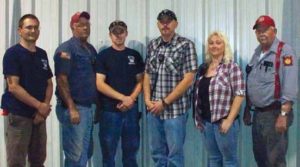 Howell County Rural Fire District #1 would like to give a shout out to our officers. We have had some promotions in our department and would like to recognize them. 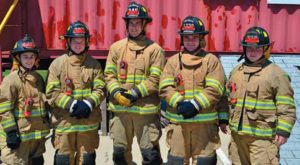 The Warrensburg Fire Department has recently graduated nine new firefighters from their orientation academy. Captain Terry Hill and Battalion Chief Bryan Wilson manage the academy for new part time firefighters. They go through a modified version of basic firefighter with an emphasis on the way Warrensburg operates and are taught by the officers and firefighters at Warrensburg. Some of these newest firefighters will enter the student resident program in Warrensburg which is managed by Chief Wilson. The part time program is a very valuable program to the department, supplementing the career staff during times of need and filling in as minimum manning as needed. 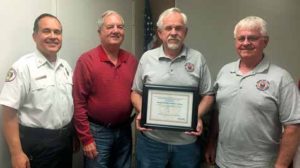 After several months of coordination between Taney County Ambulance District and Western Taney Fire, Chief Chris Berndt presented the board of directors with the fire districts newly issued Emergency Medical Response Agency (EMRA) License from the state of Missouri during their May 9 meeting. Prior to receiving the state license Western Taney County Fire Protection District was limited to providing a basic level of medical care.

The new licensure now allows paramedics who are employed by or volunteer with the fire district to give lifesaving medications and perform advanced procedures on those suffering from medical and traumatic emergencies. Some of the fire district vehicles will now carry medications that can be given during emergencies such as heart attacks, allergic reactions, and respiratory distress along with heart monitoring equipment and airway equipment. END_OF_DOCUMENT_TOKEN_TO_BE_REPLACED