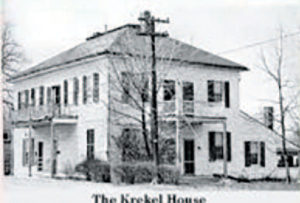 Any readers of the FFAM newsletter who have followed any of the articles I have published over the last several years know that I am a native of Missouri and grew up in O’Fallon, near St. Louis, in St. Charles County. When I was growing up there, it was a community of around eight hundred people and lots of dogs and cats. Everyone knew everyone, even down to the kids, dogs and cats.

The railroad was the real catalyst for the formation of the town. The North Missouri Railroad Company was incorporated in March of 1851 to build a railroad from St. Charles to the Iowa line. The North Missouri subsequently passed into the hands of the Wabash Railroad Company. In 1853, John O’Fallon was the president of the board of directors of the railroad. Anyone care to guess where the town got its name? 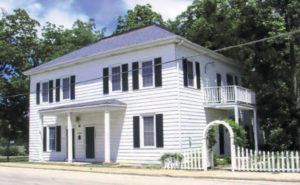 A German immigrant, Nicholas Krekel, was O’Fallon’s first resident and first retailer in 1856 and in 1857, the first postmaster and railroad agent, as well. He operated his general merchandise store out of his house, which also housed the post office. He settled there because his older brother, Judge Arnold Krekel (who also owned a newspaper) purchased land, plotted a town and donated some of the property for the new railroad. Nicholas Krekel was my great-grandfather. The Krekel home still stands in O’Fallon at the intersection of Main Street and Civic Park Drive. It ended up being the home of my grandfather and grandmother Westhoff, where my Dad was raised.

O’Fallon is now a city of nearly 100,000 population and thirty square miles.

My other great-grandfather Frederick Westhoff, an emigrant tailor from Neuenkirchen, Germany, came to O’Fallon in 1862 and set up shop on Main Street. In May of 1897 his firm was incorporated as the Westhoff Grain and Mercantile Company. 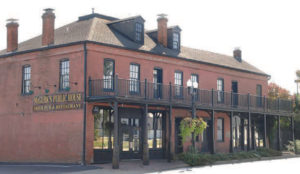 My grandfather William F. Westhoff was born October 7, 1869 on a farm in a log house outside O’Fallon. The farm was located in the general area that is now Forest Park subdivision. He and my grandmother Mary Krekel, were married at Assumption Church on October 25, 1892. He was a civic leader and noted businessman. At the death of his Father in 1898, he took over the leadership of the family business. These are some of his accomplishments. 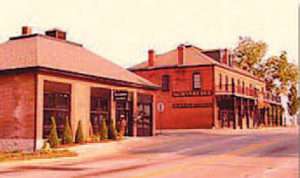 He held the general managers position of the companies for thirty-five years until his death. He died November 17, 1942, just one day before my third birthday. He also published and printed “The Leader,” a monthly ad sheet and newspaper.

My Dad, Albert William (Bill) Westhoff and his twin brother Norbert were born August 28, 1910 in the big white house across the railroad tracks from the store and described previously in this article as the “Krekel House”. There are hundreds of stories of these twin boys growing up in this little town but not room to tell them here.

My folks, Bill and Catherine, were married June 5, 1935 and they moved into living quarters on the second floor of the store and later to a small house on Elm Street a block off Main Street where I was born on November 18, 1939. The house was almost directly across the street from what was the headquarters for the O’Fallon Fire Protection District until a year or so ago.

My Dad picked up some of his Fathers interests. He operated his own printing business both in O’Fallon and St. Charles for many years.

The family passion for the fire service was also carried on to this generation. He was a member of the local fire department for most of a half century. He was a charter member of the St. Charles County Fire Protection Association and a life long member of the FFAM, attending most conventions. 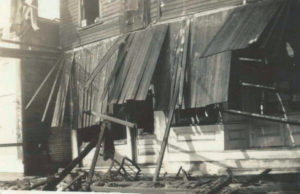 DRUG STORE FIRE IN O’FALLON IN THE WINTER OF 1942

The third generation would be me, Albert William (Bill) Westhoff, Jr.

Born in a house, not a hospital, on the 18th of November, 1939. The house was a block off Main Street and in the winter of 1942 the local drug store on Main Street was involved in a major fire. The fire made history in the town for two reasons. The first was the fact that it was the first fire of any size when the new 1941 GMC/Central Pumper was used.

The second and most important reason was that my Mother carried me up to observe the firefighting operation. Both my parents were sure that incident “sparked” my interest in the fire service! 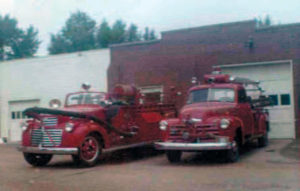 In order to keep this article to a size that will be logical, I will just list the departments I have been involved in since I was old enough to go to fires and keep it simple. I will follow that thought process for the remaining generations. 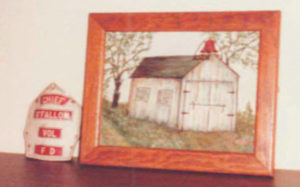 PAINTING OF THE ORIGINAL O’FALLON FIRE STATION WHICH HOUSED CHEMICAL WAGON AND LATER A 1927 CHEVY FRONT MOUNT PUMPER, DONE BY MY MOTHER FROM MEMORY.

If I attempted to fill in the blanks between all of these activities over the last half-century, it would be a book. Which I may still write at some point.

Elaine and I collectively have six children, thirteen grandchildren and two very new great-grandkids. It goes without saying that we are proud of them all and they have made us proud. Only two of these guys decided to follow the “red brick road” and do fire stuff.

Donna, holds two degrees from two of my favorite places. In her early days she finished a degree from the University of Missouri in “Parks and Recreation” but Amy Pohler she was not. After a brief career at Disney World the fairy dust was gone and so was her excitement for that line of work.

She then acquired a Fire Protection and Safety Degree from Oklahoma State University and has a very successful fire and safety consulting business of her own in Dallas.

Doug, at a very young age, started responding with me on calls in the Boone County Fire District and has not left since. It is safe to say that he has made a career and his life in the Columbia since he recently received his forty-five year service award from BCFPD.

Our grandson, Dylan Westhoff is one of the two family members who make up the fifth generation. He is currently serving as a firefighter for the United States Air Force at Travis AFB California. He is also working toward a fire protection degree while serving his country.

Trevor Kukuk is our grandson–in-law from Stillwater, Oklahoma and is the second member of the fifth generation. He will finish his degree in Fire Protection and Safety at OSU next year. He also serves as a volunteer firefighter for the Ripley, Oklahoma Fire Department.

WHAT ABOUT THE SIXTH?

Within the last six months, we have been blessed with two of the most awesome great-grandchildren in the world. They are both pictured here, both wearing their respective “fire suits”. Maybe someone will carry them up to a corner and let them watch a fire fighting operation when they are two or three years old and they will get the “spark” too. 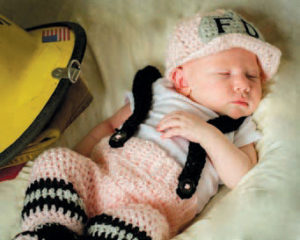 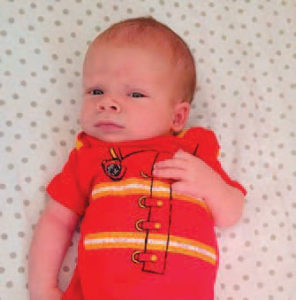