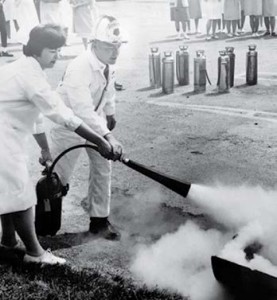 University of Missouri Fire Instructor Bill Westhoff conducting fire extinguisher training at the hospital in Washington in the 1970’s.

In my last several articles I have featured “people, places and things” that I love about the fire service in our great State of Missouri. To continue that trend, I want to cover one of the finest organizations I know and have worked with in many training experiences over the years. That organization is the Washington, Missouri Fire Department. Their website has this slogan very proudly displayed “Courageous Professionals Since 1852”. It seems to me that says it all.

For over two decades, I traveled from one end of this state to the other, Macon to Monett, Hayti to Hannibal, Kirksville to Kansas City, and every crossroads where there was a fire department of any size that needed training. As a field instructor for the University of Missouri Fire and Rescue Training Institute and later, the director, I visited hundreds of fire stations in every corner of the state.

That period was also a huge learning experience of me. One major thing I learned was that the fire department that I visited was only as good as the leadership that guided its destiny. If you walked into a station and the equipment was dirty and building a mess, you could be assured that the fire chief was a person that was just filling the slot because no one else in the community was willing to step up to the job.

During that era there was no instant communications and most classes were scheduled by letter or phone messages. I can recall going into a community in the southeast portion of the state and was scheduled to meet the fire chief at the fire station at three for a seven o’clock in the evening class. I finally found the chief by phone around five only to have him tell me he “forgot” about the class and would be down as soon as he finished mowing his lawn. He not only forgot the class but had also failed to mention it to any of his firefighters! When he did arrive around six-thirty he suggested we sound the town siren to call all the “unsuspecting” firefighters to come to class. Needless to say, no class was held in that community that evening…or any other evening for quite some time!

Structural Fire Training in Washington in the 1970’s. Buildings donated by local residents to be burned for training purposes were not uncommon, before several thousand pages of rules were developed by the EPA. Fire Chief Don Hahne is in the foreground of the photo in the white gear and Instructor Westhoff is in the white helmet at the right corner of the structure. A great time was had by all.

Another great day was had in northwest Missouri when I entered the station of a small department that still had their snow chains on their rigs in the middle of June. I gave them credit for having the best fire prevention program in the state since it was obvious the rigs had not been out of the station or even started for quite some time. They also got that week’s award for the worst leadership!

Since 1965 when I started to hang out around Washington and some of the other departments in the Franklin Gasconade County Fire Fighters Association, there have been three Washington Fire Chiefs that I have always admired for their dedication and knowledge. All three are pictured in this article and well known in the area as well as the Fire Fighters Association of Missouri. Washington has hosted the FFAM convention in 1961, 1971, 1981, 1991 and 2002. One mark of exceptional leadership is for your department to take part in regional, state, and national organizations.

Another mark of outstanding leadership is your departments participation in not only local training, but also regional fire schools, state sponsored schools, and degree programs in your area in fire science. The Washington Volunteer Fire Company has been a leader in all these since its inception in 1852. They even have one chief officer with a four-year degree in Fire Protection and Safety from Oklahoma State University, the “West Point” of fire protection. 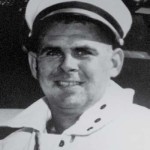 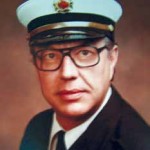 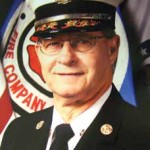 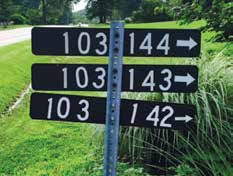 During the tenure of Fire Chief Ken Wilson (1955-1962) a very unique and original numbering system was developed for the rural area protected by the Washington Volunteer Fire Company. This system of course preceded the present elaborate 911 address system. This sign system is still in use today and they can be seen all around the area. The signs as well as the placement and maintenance are all done by the volunteer staff of the department.

Still another true mark of professionalism is innovation. There has been no shortage of this in the WVFC. Included in this article are photos of a unique rural marking and address system that has been in place in the Washington area since the 1950’s. Washington was also the first department in Missouri to take delivery of a snorkel apparatus with a pump. Some would say that St. Louis Fire Department was first, but their snorkel did not have pumping capability.

The best compliment any organization can receive is the fact that other department’s want to be like them. There is an old saying that goes, “imitation is the strongest form of flattery.” I was the first fire chief of an organization in Boone County that started out as the Central Missouri Radio Squad Volunteer Fire Department and ended up being the Boone County Fire Protection District. We did follow in the footsteps of WVFC in many ways. We ended up on the same radio frequency; had the same apparatus numbering system; and in many cases, equipment made it way from Franklin County to Boone County. For all the assistance and equipment, we will always remain very grateful.

The WVFC protects almost 15,000 residents of the City of Washington and another 10,000 in their rural area. Since 1852 not a nickel of those citizens money has ever been spent to provide personnel to the fire department. I would say that if you are looking for a great place to come to learn how a progressive fire department operates… Come to Washington Missouri!