For the remainder of the year, and maybe there after, depending on how long I last, we will be featuring individual people places and things around our great state. These articles will involve folks, departments and maybe even fire trucks. I would like to call this effort People, Places and Things I Have Known and Loved!

Authors note:
When I was the Fire Chief of the Columbia Fire Department, let’s just say in the 1980’s, I had an experience that one might call a major career modification. I shot my first wife’s lover in the driveway of our home north of Columbia. Needless to say, city governments do not take that kind of action lightly, nor does law enforcement of the courts. Never went to jail and he did not die, thank goodness, but did make me rather paranoid for a period of time. The deed took place in November and the following year at Winter Fire School in February I went over to visit some old friends and was still looking for a job, and a life.

One of the first people I encountered in the hall was Al Banken, the Chief of the Dexter Fire Department We visited a couple of minutes and his almost exact words were “You know the boys and I have been comin’ to Columbia for fire school for years and the city is always nice enough to give us some cash to eat lunches and stuff on. We talked it over this morning and if I saw you they all wanted you to have this.” At this point he pressed around $150 in cash into my palm. These are the kind of folks I want to tell you about that I have known and loved!

A special thanks goes to Noreen Hyslop of The Daily Statesman for the following two articles that provide a lot of insight to the man and the department. 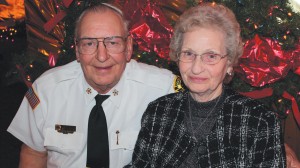 It was at times an emotional tribute on a Sunday in early 2012, but one also laced with humor, as city dignitaries, friends and family came together in Dexter to honor Fire Chief Al Banken upon his retirement from the local department after a stellar 48-year career.

Several tributes were paid to Banken throughout the afternoon reception held in his honor at the Sacred Heart Catholic Church Parish Center, but perhaps none as fitting as that delivered by Gary Pride, retired employee of Poplar Bluff’s Police and Fire Departments and longtime friend and colleague of Banken’s. Pride currently serves as Three Rivers Community College’s Public Safety Institute Coordinator.

“Al Banken has inspired others to learn more, to do more, and to become more in their lives,” Pride told the capacity crowd Sunday. “The measure of a man’s career,” Pride continued, “is not so much the things he has accomplished, but rather in the number of people who choose to mold their career after your example.”

An example of true value, Pride said, has been continually set by Banken. Those values, he said, stand as a classic illustration for others to emulate.

Banken was 29 years old when he began his career with the Dexter Fire Department in 1964. The department consisted of one station and two trucks, with every firefighter a volunteer. A siren sounded in the downtown area summoned firefighters.

Thirteen trucks, generator auxiliary units and emergency equipment on mobile trailers are among the equipment utilized in today’s department, housed at two spacious fire stations on the east and west ends of town.

Banken is credited with playing an integral role in the department’s growth, both in the improvement of its physical facilities and in its communication advancements over the years.

“Al has continually worked successfully with numerous agencies across the state over the years to improve the level of preparedness and is well respected across the region for his motivational skills and his willingness to help others,” Pride commented.

Many of those “others” traveled the miles to wish the now retired Chief well on Sunday. Fire departments from across Southeast Missouri were well represented at the gathering, as were various emergency response agencies, including the Department of Conservation, the Dept. of Natural Resources and Sikeston’s Dept. of Safety.

Banken’s name has become synonymous with quality level training over the years. He is credited with continually coordinating classes on safety and newly developed fire-fighting techniques for his firefighters, often utilizing resources from the University of Missouri at Columbia, Three Rivers Community College and Southeast Missouri State University.

As a result, Banken is proud to state that in his 48 years at the department, not one firefighter’s life was in peril while on duty with the department.

“Safety has always been my first concern,” he said. “And more than anything I’ve done in the span of my career, I am proudest that we’ve never lost a firefighter in the line of duty.”

Fire Chief Al Banken officially stepped down from his role at midnight Sunday. His name, however, will forever be in the books as having played a vital role in the city of Dexter’s history. And as echoed by a grateful crowd of well-wishers on Sunday, he will always be “Chief.” 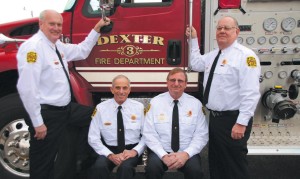 If experience translates into quality, then the Dexter Fire Department is one quality outfit.

The local fire department has 28 members, only three of whom are full time employees. One is a part-time employee. In total, the roster represents nearly 400 years of experience. More impressive, however is the fact that just four members of the department, Fire Chief Don Seymore among them, represent 151 of those years.

Having the longest history with the department is Captain Dale Rowe, who signed on as a volunteer when he was 18 years old and married just three months. There was one fire station that consisted of a small block building situated near the city’s train depot, and two fire trucks made up the fleet.

“We really did used to ride on the back of the truck to get to the fires, too. I rode all the way to Essex one time,” Rowe recalls. He is entering his 44th year as a firefighter.

Not far behind Dale Rowe in tenure is his twin brother, Dave who is now serving as Assistant Fire Chief. He has 36 years on the department, 26 of which have been as a full-time employee.

With 37 years behind him is Captain John Jenkins, and Seymore who is beginning his third year as chief who has spent 35 years on the Dexter Fire Department.

Jenkins recalls that at the downtown station when he began as a firefighter, there was a siren on a pole, and there was a call system through the police dispatcher that notified firemen of a fire.

“Later we got CBs, but back then we’d either call dispatch to see where the fire was, or we’d just drive to the station. A lot of times, you could go to the station and just follow the water trail,” laughs Jenkins. “We’ve all done that.”

The four, along with the rest of the department, have been “on call,” with boots by their beds for most of their lives.

“We’ve been called away from a lot of birthday parties and family gatherings,” says Jenkins, and the others agree.

“My wife refused to let me bring my pager to our wedding,” the chief laughs.

Seymore remembers when the foursome represented the “younger generation”.

“We were the ones always going for training and bringing back new methods to fight fires and new technology that wasn’t always readily adopted. We had to prove ourselves more than once.”

Training, the four agree, has been the key ingredient that has sustained the department’s reputation as a solid and cohesive response team whose members make up more than just a department.

Housed in Columbia, Missouri is the Fire and Rescue Training Institute, from which most of the department’s training derives.

“We used to have to travel to Columbia to receive special training,” says Assistant Fire Chief Dave Rowe. “We’re fortunate now in that most often now the instructors come to us, and training is conducted right here in Dexter.”

Much has changed about the methodology of fire fighting over the four decades and more that the Rowe twins, Seymore, and Jenkins have served.

“Homes and other structures aren’t built the way they used to be built,” Seymore explains. “A fire doesn’t burn like it used to. Today we have concerns with toxins and other dangers that weren’t even heard of when we started. There are a lot of things you have to know about the potential spread of the fire and the dangers that exist within specific structures, and that’s why continual training is so vital.”

Fire fighting equipment acquired over the years has been equally vital.

“When we started,” recalls Jenkins, “we used to enter a burning structure and just hold our breath till we couldn’t hold it any more and run out for air. When we got breathing apparatus, it changed everything.”
Firefighters not only receive continual training with regard to new fire fighting techniques and equipment, but also in applications for rescue and extrication.

“That’s my special interest,” says Seymore, who admits to being drawn to the department’s Extrication Team as a young man.

“When the Extrication Team started,” Jenkins explains, “it mostly consisted of guys who worked in the automotive field, who knew mechanics, because it involved rescuing people from vehicles.”

The team was established in the early 1980s with a handful of interested fire fighting personnel and a used bread truck that was transformed into the department’s first rescue unit.

Today, that unit is a well-oiled machine that regularly is trained in every aspect of vehicle rescue. They are often called upon by neighboring department’s for assistance and have gained the respect of units across southeast Missouri for their expertise in the area of emergency extrication and rescue.

As imperative to the department as its training and equipment is the camaraderie among its personnel. Within the department there seems to exist a “brotherhood,” a special bond that is evident both on and off duty, often interjected with humor, but always with the assurance that they have each other’s back at all times.

“You’ve got to have people you can trust, and we all have to work together,” Seymore notes. “We have a younger generation of firefighters, and then another group that’s more established, and then this group of senior members that somehow I’m now a part of. There’s an overall respect for each other in all we do that might sometimes be unspoken, but we each know it exists. If it didn’t, we wouldn’t be the department that we’ve become over the years.”