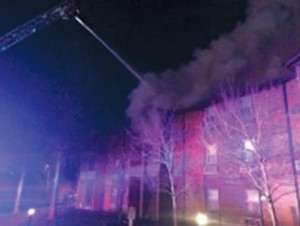 At 5:45 a.m. on January 5, 2015, the Herculaneum Fire Department was dispatched to an alarm sounding at Autumn Ridge Senior Living facility, a multi-story residential facility in Herculaneum. Immediately, Jefferson County 911 Dispatch received multiple phone reports of visible flames on the exterior wall and roof of the building. The alarm was quickly upgraded to a first alarm assignment resulting in mutual aid assistance from the Festus Fire Department, Crystal City Fire Department, Dunklin Fire Protection District and the Joachim-Plattin Ambulance District.

In route from his home, Assistant Chief Chris Baker sees visible flames and requests a second alarm response from Rock Community Fire Protection District, Antonia Fire Protection District, Mapaville Fire Protection District and a second apparatus from the Festus Fire Department. At the same time, an EMS MCI is dispatched by the Festus Fire Dispatch. At 5:51 a.m., the first Herculaneum apparatus arrives on the scene to find flames from a third floor apartment balcony and into the roof structure above the apartment. Herculaneum firefighters quickly attacked the fire from outside using a 1 ¾” pre-connected line. Firefighters are informed that all residents have been safely evacuated from the building by the facility staff. The facility staff was able to safely evacuate 93 residents with only two minor injuries reported. Fire crews conducted primary and secondary searches of all three floors in three building wings. No additional residents were located in the structure.

As additional units arrived on the scene, an aerial ladder was used to completely extinguish the fire. Fire damage was contained to the outside balconies of two apartments and the roof structure above. Minimal fire damage occurred in the apartments. The fire was reported under control at 6:36 a.m. All evacuated residents were transported to Mercy Hospital–Jefferson in Crystal City by Joachim-Plattin ambulances, a private bus company and the facility bus.

Fire scene investigations were conducted by the Jefferson County Fire Investigation team and the Missouri State Fire Marshal Office. The cause of the fire was determined to be accidental in nature. The final fire crews left the scene at 10:00 a.m.

As a result of the fire, smoke and water damage, the facility remained closed for four weeks. Residents were allowed to return to the unaffected wings in early February, while residents in the affected wing will remain displaced for approximately four months.