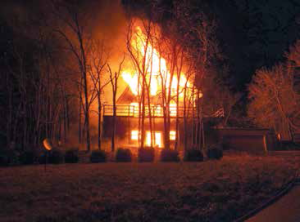 Fire personnel from Johnson County Fire Protection District were alerted at 5:20 a.m. December 23, 2014 of smoke in a bedroom and garage of a residential structure southeast of Warrensburg. Those residents were advised to evacuate the residence and when they did they found the neighboring residence fully involved in fire. Crews arrived on scene to find the involved residence already in partial collapse. The fire was contained and the neighboring structures were protected from fire spread. The structure had reportedly been vacant for approximately one year, but some utilities were still in service. Due to the massive destruction no cause was determined following examination of the scene.

Firefighters were again summoned at 10:45 p.m. the same day for a second structure fire in a vacant residence in Chilhowee, near the opposite end of the District. Neighbors again were not aware of the fire until the structure was well involved with fire and was partially collapsing. Personnel arrived on the scene and extinguished the fire and prevented damage to an adjacent residence. The cause of the fire was determined to be incendiary.

The second structure was located approximately two blocks diagonally from yet another vacant residence that was damaged by fire on November 7, 2014. The fire in this residence was also determined to be incendiary.

An additional fire was reported at 10:17 p.m. on January 8, 2015 in a vacant residence south of Knob Noster and again on the opposite side of the District as the last fire. The residence was located within an area recently acquired by the Air Force and was scheduled for future demolition. Personnel assisted Whiteman Air Force Fire Department personnel at the scene and confined the damage to the structure of origin. This fire also appears to have been incendiary.