The Missouri EMS Funeral Response Team held their annual conference at the Lake of the Ozarks on October 17-19. It was held at the Country Club Hotel and Spa. This year for the first time it was open to fire and law enforcement personal that was interested in learning about Line of Duty Deaths (LODD). Members from numerous fire agencies, EMS organizations, along with members of the Fire Funeral Assist Team were in attendance. General session’s were held and breakout sessions included information about axes and pike poles used in silent guard, flag posting, flag folding, marching and drills, along with rifle use.

The key topic, LODD 101 was instructed by Eric Johnson. Mr. Johnson is the founder of Supporting Hero’s out of Louisville, Kentucky. He shared a lot of information on LODD, what levels of honors are appropriate for each type of funeral and talked about the benefits that may be available to families that lost a loved one in the line of duty. END_OF_DOCUMENT_TOKEN_TO_BE_REPLACED

The title I have chosen for this article is not really very accurate. The men featured in it had no idea there would ever be an institute for fire and rescue training at the University of Missouri. Actually, there were a number of years when I was the director and I didn’t think I would ever see it either! The lack of that title did not reduce the passion these early warriors had to travel thousands of miles and burn lots of midnight oil to bring training to the firefighters of Missouri.

The true story of organized training for the state actually started in 1933, with the presentation of the Missouri Central Fire School. This program was sponsored by the University of Missouri and conducted with the assistance of several local fire departments, including Columbia, the chief of the Columbia Fire Department at the time was Tom Walden and he took great pride in his ladder raising drill team. END_OF_DOCUMENT_TOKEN_TO_BE_REPLACED

Hello to all from the east side of the state. When this article makes print the weather will have a chill and the leaves will be changing which means fall is here and winter is on its way. Being the season of fall, Fire Prevention Week has come and gone and I hope each and every department and district went out to spread the word on fire prevention. In doing so, I hope this convention will have many posters to judge from all over the state. At the last board meeting a question was raised that may change when and where the winners are awarded. More information will be provided when a decision is made. I have been watching the weather channel, reading the farmers almanac and cut open persimmon seeds, and they are predicting that the upcoming winter will be eventful and cold. So here are a few tips for the upcoming winter: END_OF_DOCUMENT_TOKEN_TO_BE_REPLACED 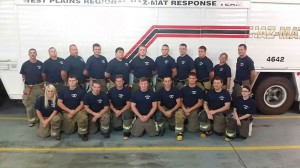 Hope this finds everyone well. I have enjoyed the last couple of weeks traveling across the state watching the transition from summer to fall. It is apparent to me as I get older, how present I find myself in these types of moments. The old saying “stop and smell the roses” comes to mind. I have not been good at this in the past, but I am working on it. I challenge each one of you to slow down and enjoy the fall colors and family time the next couple of months.

Below is a picture of the 2014-15 Firefighter I-II class that is presently in session at the West Plains Fire Department. These men and women started their class in September, and plans are for the class to finish in February. The students attend two nights a week and every other Saturday. We have students from Mansfield, Lanton, Howell Rural, Willow Springs, and West Plains fire departments. END_OF_DOCUMENT_TOKEN_TO_BE_REPLACED

By the time you get this newsletter I will have returned from attending a seminar sponsored by the fire museum network. This is made up of firefighter’s museums all across the United States. We will be meeting in Jeffersonville, Indiana. I hope to get some information on fundraising possibilities and possible grant applications we might access in order to raise some of the funds for our museum. I also hope to get some feedback about their museums and how they put them together. We will tour several area museums and be able to see firsthand what the possibilities are.

At the recent FFAM board meeting, I heard of several businesses, mostly eating establishments, who do fundraising drives for various charitable organizations. Do you know of any in your communities who would do one for our project? You can let me know or contact them on my behalf and see if we can get some local support for this project. I will be contacting several Texas Roadhouse restaurants across Missouri to see if they will do one for us. Please contact me. END_OF_DOCUMENT_TOKEN_TO_BE_REPLACED 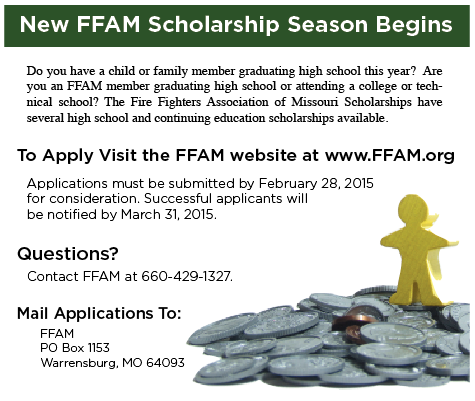 The scholarship committee has some exciting news to tell our members. The committee heard lots of comments from not only our members but also our past recipients to put the applications online and to be able to submit the applications online. The committee listened, and we are happy to report that this can now happen. There are two scholarships, a high school senior entering college for the first time, and a continuing education scholarship. Yes, there is a continuing education application for any adult wanting help with going back to school or to help with the cost of a emergency services or fire classes or whatever they want to go back to school for. Not just for college students. I would encourage any adult wanting to go back to school, this is your opportunity, the FFAM is willing to help out any member that qualifies. END_OF_DOCUMENT_TOKEN_TO_BE_REPLACED

Iowa hosted the Midwest Multistate Meeting that included seven state fire service associations on Saturday, October 25 in Des Moines, IA. This meeting has taken place each year since 1996 and involves a full day of networking with other state fire service associations. The entire front row of the accompanied photo is of the Iowa board plus their past president and the other six states represented are Illinois, Minnesota, Kansas, Nebraska, Wisconsin, and Missouri. I have attended every meeting except 2013 since this networking gathering was started in 1996 in Iowa City and then moved to Des Moines in 1998. Iowa has hosted the entire time and offers every year for someone else to take it, but their central location has kept it there. END_OF_DOCUMENT_TOKEN_TO_BE_REPLACED

President Kenneth Hoover called the meeting of the Board of Directors of the Fire Fighters Association of Missouri to order at 9:00 a.m. Sunday, October 5, 2014 at the State Fair Fire Department in Sedalia, Missouri. END_OF_DOCUMENT_TOKEN_TO_BE_REPLACED