You are here: Home > Pipeline Rupture Response in Johnson County 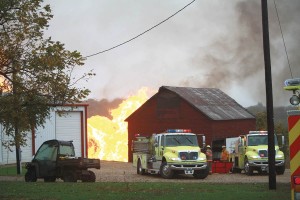 The Johnson County Fire Protection District responded to a pipeline rupture on October 13, 2014 at approximately 10:22 a.m. Crews from three district stations responded to the incident. The pipeline, operated by Panhandle Eastern, ruptured in a field near a barn and residence. Crews established a safe area around the incident scene until pipeline officials could arrive to shut-down the line.