You are here: Home > Highlandville Rural FPD Gets New Equipment 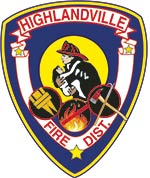 The Highlandville Rural Fire Protection District has their eyes set on lowering the district’s International Organization for Standardization (ISO) rating. “There were several factors that lead us into purchasing the new engine, the air compressor and starting the construction on our training tower,” Adam Gilbert, the districts PIO, stated.

“We have several apparatus that are aging in our fleet and it was time to look at upgrading our capabilities,” said Gilbert.

The 1980s model Ford, that was bought in the early 2000s, has been replaced with a 2004 KME Predator that was purchased from Missouri Fire Apparatus for $140,000. With upgraded features, capacity for more firefighters, seat mounted SCBAs, headsets, and room for more equipment, the new engine represents an improvement in Highlandville fire response, and a step toward a safer, more affordable horizon.

“When we looked at what else we could improve as a district it was to provide our firefighters with more realistic training,” said Gilbert. “Having our own air compressor and training tower allows us to train more frequently and rigorously, with our air packs.”

“We’ve never had our own compressor. We’ve always had to either go to Southern Stone County Fire District, Branson West or Nixa to fill our air packs up,” Chief Kevin Stephens said. “Every time, we’d be out of the district for about four hours along with a truck and personnel, so you’re burning fuel, there’s wear and tear and there’s four or five hours away.”

“Filling the SCBAs out of district left firefighters at the mercy of other surrounding agencies,” said Gilbert. “Often times we would go to our neighboring departments that would graciously fill our cascade and they would get toned for a call rendering our apparatus and personnel out of service for long periods of time.”

The new three-story training tower will be located at the district’s headquarters with a completion date in 2015. Measuring 14 by 14 feet at the base, the tower will have two flights of stairs, a second room at ground level and a ventilation prop on the third floor, collectively providing training opportunities for houses and buildings of all sizes.