You are here: Home > Palmyra Responds to Local Fire 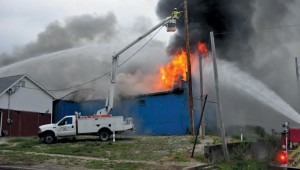 Palmyra Fire was dispatched at 0634 to a report of a structure fire in the downtown business district of Palmyra. The building was home to a second hand store. Upon arrival, heavy fire was observed at the back of the structure at the B/C corner; as the building was unoccupied, a defensive attack was utilized. The primary concern was a law office on the D side of the building. Mutual aid assistance was requested from the Hannibal Fire Department in order to utilized their ladder capability to establish a “wall of water” between the two structures. The second hand store was a total loss, the law office suffered no damage. While the cause of the fire is not considered suspicious, it remains under investigation by the Missouri State Fire Marshall’s office.