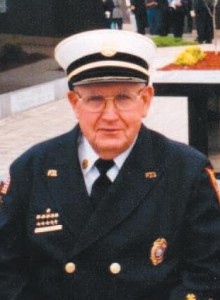 In the mid 1990’s Dad had a vision and desire that Missouri needed a firefighters memorial and museum. At more than one convention Dad approached the presidents of FFAM with his request. Finally at the February meeting before the O’Fallon convention and after much intense discussion with then FFAM President Jim Barger, President Barger appointed Art Smith to a committee with the task of building a firefighters memorial. No surprise the memorial was important to Dad. Something he put countless hours into getting it started, getting it built and then keeping it going. He could always be found at the memorial just about every day weather permitting. Dad gladly took on the position of memorial ambassador. You could tell by his talks with anyone stopping by that his love was the fire service and the memorial. He would sometimes become discouraged with the fund-raising but he refused to ever give up. Because of his efforts and leadership, we now have one of the finest memorials in the United States. Besides keeping the weeds out of bounds with things, it was his honor in ringing the bell during the annual Sunday services. His example should encourage all of us to work diligently to complete the educational/museum complex. Dad is overlooking us as we strive to see that hope and vision eventually accomplished. 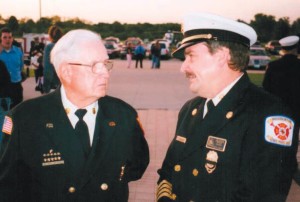 For Dad, the Foundation and FFAM was his recreation. There were times it was work, but loving what you do put a smile on his face and a kick in his step. Most people outside of Lewistown came to know and remember Dad for his fire equipment business, FFAM, State Fair Fire Department, and the Foundation. Those in and around Lewistown will also remember Dad and his brother Cliff starting an automotive garage, then John Deere dealership and farming. None of those three worked out, so he started punching a time card for 20-years, while starting a part-time Fire Equipment business that eventually became his dream come true. Although he still worked about the same number of hours per day at 12+ Dad did not feel his days were so much about work as they were enjoying people and what life had to offer.

His approach to customers was first selling of self, then ensuring a true trust in his word, and then the product; which was not always the low-low price, but fair and always serviced. Having already started his part-time fire equipment business, FFAM worked out well with meeting fire departments in an area of Missouri that did not know a lot about FFAM in the early 70’s. Although never mentioned until his passing, over 20 departments joined FFAM in the early 70’s largely because Dad paid their department dues and they were only responsible for the individual membership. Nearly all stayed members after their first year seeing the obvious benefits. I have tried to follow in his footsteps where the FFAM is concerned, having held the office of a district director, vice president and finally president as my father did in 1979. Dad was president during our 25th Anniversary, and I during our 50th. The same in regard to the memorial only starting as a board member and now serving as chairman. I find myself frequently asking, what would you do? 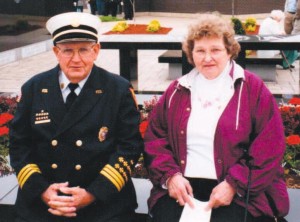 Another fact few may know is how the contests came to the FFAM Convention. Dad was visiting an Iowa convention, yes, I was tagging along, and saw their contests for the first time. He brought the idea back to Missouri, presented it to the board and it barely passed. Some were against implementing what they called “Firefighter Games”. Concerned about the financial impact of something which may not be sustained, he arranged and paid for most of the equipment that was used that first year along with some incidental expenses. Looks like it was a good idea after all. Until 12-years ago, Dad also paid for and presented the over-all trophy.

Every year that he had a demo fire truck, it spent a tour of duty at the Missouri State Fair Fire Department. Times when he did not, he arranged his turn for one which just happened to occur during fair time. Over the years, it also included a few ambulances. Loose equipment for the fair was never a problem with Dad. New equipment came off the shelf, got used for 12-days and then sold at or below cost as demo equipment. Several departments over the years caught on to this and were calling a few days before or just after the fair for a bargain.

The Broom and Dust Pan was tagged to Dad from Lonny Lentz and Jim Sanders, “Art, when you get your send off, we are going to include a broom and dust pan so you don’t get bored up there, but good luck finding any dirt”. That was because as long as anyone could remember, anything going on at the State Fair Fire Station, Dad was either working on a task or cleaning something. Same back home.

As most people know, Dad spent his later years keeping the memorial and grounds looking as good as possible. The grass was never mowed well enough in his mind. It was cut too high, too wet, they did not throw it the right direction or take any time to clean off the cuttings. Keeping things watered was also an evolution of thinking outside the box. Meeting up with that first time visitor to the site made his day. As time took its toll on his memory, it was interesting to me that he could provide details of a visitor, the flowers, THE GRASS, but not so much on other things that day. He loved people and loved the spirit of service to a cause. 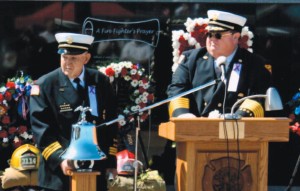 Editors note: I’ve had the pleasure of knowing Art Smith since I came to MU FRTI in 1989. One couldn’t find a better man than this. When I took the Winter Fire School Expo over as its coordinator in the late 90’s, I always noticed that Art was the first person to pop through the door, always a couple hours early, and always itching to get his truck on the expo floor. If I tried to tell him he had to wait until the room was ready for set-up, I was always promptly informed that he had a truck to clean! And just for the record, he usually got what he wanted. I’ve had the pleasure of working with him not only at the Expo, but at the Missouri State Fair Fire Department and most importantly at the Firefighters Memorial; that he so dearly loved. He always let me know I was doing ok at putting the paper together and only ever had one request. That was to make the font just a little bigger for him. And it was done. From the time I’ve known this man he has always called me “Gayla”. I never corrected him. I’m pretty sure he knew better, because he always had a little grin when he said it, but to me, it was ok that he did. So Art, God speed. I know that you will be missed terribly, by your family, your friends, those visitors to the memorial and anyone that ever crossed your path. I know by now you’ve probably cleaned something while Lonnie, Jim and Joe let you! You just keep after it, as you would say, and thank you for all you’ve done before. Your “Gayla” – Gail Hagans, MU FRTI