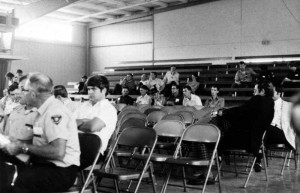 A very attentive audience and lots of empty chairs at the general session, including a young Bob Rennick, who at the time I think was the training officer at the Columbia Fire Department.

Over the couple decades plus that I was at the University of Missouri Fire Training program I had lots of weird ideas that came to pass. Some of them worked out, and some were just a big flop.

Like the flyer that we mailed to all the fire departments in the state suggesting they “borrow” a school bus from their local school district and bring a bus load of firefighters to Summer Fire School. Duh! The idea of riding a school bus in July from Kennett was not one that was accepted, not even from Moberly or Rocheport! So much for cheap transportation.

Another “brain fade” of mine was to move the Summer Fire School from Columbia to the fairgrounds in Sedalia. One of the motivations for this move was that the University administration had just formed a new section of the Extension Division known as the “conference and short course unit”. All on campus activities such as the Summer Fire School would now be coordinated through this new unit. To fund the unit, the administration would require a one-dollar fee per day to be added to the registration fee to fund the unit. That upset me greatly at the time because we had always worked hard to keep the registration fee down for firefighters. The solution was to get out of Dodge and go to Sedalia.

Another motivation to go to the fairgrounds were the facilities available there. The agriculture building was new and air-conditioned and the bunks at the newly constructed fire station could be used for “low cost” housing for students.

The Summer Fire School at that time was still a three day affair, Friday, Saturday and Sunday. The first year we tried this, our staff consisted of Bush Walden, our coordinator, Tom Admire and myself as full time instructors.

As it turned out, we would have been better off to pay the university the three dollars per student out of our own pockets that to spend two weeks before and after, hauling all the crap needed to put on a fire school from Columbia to Sedalia and back. Had it not been for an army of volunteers and a lot of dedicated certified part time instructors, we would never have been able to pull it off.

The photos in this article capture some of the activities. The 1973 conference program featured Basic Firemanship, taught by a great instructor, Bob Palmer from Mehlville and Don Murray form Carthage. Firemanship II was taught by Deputy Chief Rich Lehmann from Osage Fire District in Buckner.

Rich was also the lead instructor for a number of forty hour Instructor Certification courses taught later by Fire Training. He was instrumental in the formation of a cadre of part time instructors who were and still are the backbone of fire training in Missouri

The registration fee for the 1973 fire school was seven bucks. If you could come up with another dollar a night, you could bunk in the fire station. There were a few problems with that arrangement, which I will cover in a future article.

This fairgrounds arrangement just lasted a few years and I can’t tell you how many. I do know that by 1975 we were back in Columbia, on campus, and without a one dollar a day fee! That is also the year the fire school went from a three day format to a five day adventure. But that is the subject for another article. 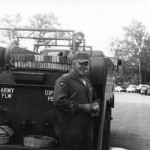 Chief Bob Davis was a huge supporter of the FFAM. 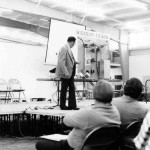 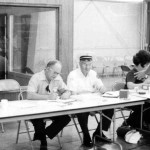 This is the registration crew at the 1973 Fire School 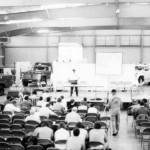 The general session at the 40th Annual Fire School in Sedalia. 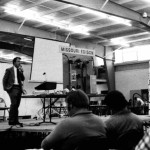 A young and slender Bill Westhoff