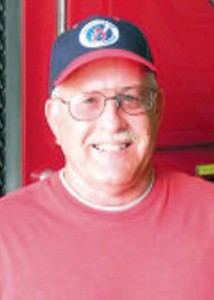 City of Houston Fire Chief Don Rust has announced his retirement effective May 1, 2014. Don has served as fire chief for the City of Houston for the past 31 years.

On January 3, 1976 Don Rust stopped by Houston City Hall to follow up on a job he had just completed for the city. Before leaving the building he was approached by city clerk, Joyce Campbell. She asked Don if he would be interested in becoming a fireman. He stated, “I guess I could do that”. Joyce said, “Fine, I will put on the roster”. On that eventful day little did Don Rust realize the impact that statement would have on the next 38 years.

In 1982 Don was serving as assistant chief of Houston’s City Fire Department. Rural Fire Chief Warren Gobble, who had led that department since its beginning, retired, and Rust took over the reins. Then when city Chief Bob Dunn stepped down in 1983 Don was appointed to that post by the mayor. Serving as both city and rural chiefs, running his excavating business, and family responsibilities were overwhelming. In 1984 Don resigned as rural chief in order to devote more time to the city. END_OF_DOCUMENT_TOKEN_TO_BE_REPLACED 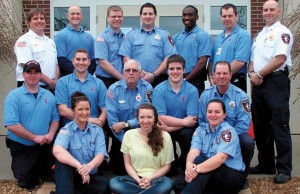 Over the last 2.5 months the Bolivar City Fire Department has experienced a few bouts of drastic change and growth, drastic, but in the best way.

In mid-February, BCFD was informed that we were awarded a fairly large grant. The grant we were awarded is the SAFER grant from FEMA. This grant allows for us to have complete, full-time crews for the first time in our history. The craziness began immediately after notification of awarding. After a whirl wind of testing and interviewing of over 25 applicants, on March 31st we welcomed nine new members to our full-time team. The grant will pay full salary and full benefits for the nine new team members for two years. END_OF_DOCUMENT_TOKEN_TO_BE_REPLACED 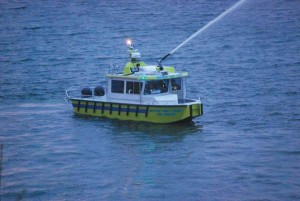 On April 14, 2014 the Western Taney County Fire District placed a 32’ fire boat, built by Lake Assault Boats in Superior Wisconsin, in service on Table Rock Lake.  It has a 1,500 GPM Darley pump powered by an inboard motor connected to TFT master stream and 2 1/2” and 5” discharges.  It is propelled by twin 300 HP Mercury outboards and lighting and A/C is powered by a 5KW generator.

The climate controlled cabin can carry eleven people or four people and two supine patients.  Besides the firefighting equipment there is ample room to carry the dive teams gear.  For electronics the boat has Radar, GPS, down and side sonar and thermal imaging.

There were some forward thinking members of the fire service in Missouri in the mid 1950’s who thought that there interest were not being addressed at the state level. These folks were just like the present members of your local fire department. Most were volunteers who worked as car dealers, farmers, welders, concrete finishers and many other trades. Some were local ministers, bankers, and leaders of their respective communities. They all had one thing in common. They wanted a voice in politics in Jefferson City and they wanted recognition for their efforts as members of their local fire department. They also wanted a way that thoughts and ideas that would improve the emergency services in the state could be shared with one another for the greater improvement of the service.

END_OF_DOCUMENT_TOKEN_TO_BE_REPLACED

During the recent General Election on Tuesday, April 8th the citizens of the Pacific Fire Protection District had an opportunity to vote on a $1,580,000 bond issue to help improve the safety of our citizens and firefighters. The bond issue, which was referred to as “Proposition Safety”, was approved with a vote of 1,322 “yes” (75.26%) and 434 “no” (24.74%). The Pacific Fire Protection District would like to thank the taxpayers for their continued support of the Fire District. END_OF_DOCUMENT_TOKEN_TO_BE_REPLACED

The Missouri National Guard and Bagpipe posted the colors followed by the singing of the national anthem by Shannon Coaley.

Chaplain Gary Boyer gave the invocation followed by the pledge of allegiance. END_OF_DOCUMENT_TOKEN_TO_BE_REPLACED 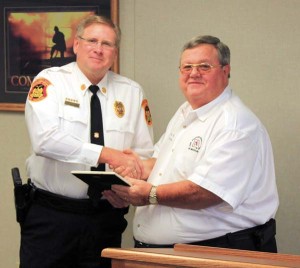 As most of you know, State Fire Marshal Randy Cole retired on April 30th after nearly 28 years with the Division. In 1986, Randy left his position as a deputy with the Cole County Sheriff’s Department to begin his career with the Division. Over the years, he served as an investigator, regional supervisor and assistant fire marshal before taking the position of state fire marshal in 2005. I had the privilege and honor of serving as his assistant state fire marshal over the last 8 ½ years. I personally learned a great deal from him over that time period. I wanted to extend my thanks to all who attended Randy’s retirement reception on April 22, and offered words of appreciation for his service to Missouri’s first responders. The fact he received resolutions from both Missouri’s House and the Senate as well as a Governor’s proclamation speaks volumes of the relationships he forged in his efforts to move the Division and fire service forward. His leadership will be missed. We wish him the best in his retirement or whatever future endeavor he chooses. I do fear for the safety of the Lake of the Ozarks crappie population. Perhaps we can persuade him to host a fish fry in the near future.

END_OF_DOCUMENT_TOKEN_TO_BE_REPLACED

What a busy time for all of us in the emergency services field. The spring weather has been beautiful and we have been receiving rain on a timely manner. As far as the weather goes, everyone at the FFAM Annual Convention in Festus, Missouri, the first weekend in May agreed, it was one of the best that I can remember in many years. I was pleased that we did not receive rain, sleet, and snow again this year.

The opening ceremony on Friday night had one of the largest crowds I have ever seen. The contests were well attended and a crowd of over 500 was in attendance at the Saturday night banquet. Randolph Mantooth was an excellent speaker and motivated us all. All of these things I mentioned did not just happen by chance, but was because of a well planned and executed effort by the Jefferson County Fire Fighters Association, led by President Haggard and all of his crew. It took many people to pull off a class act such as the one we were privileged to attend. I would also like to thank Rob and Robin Schrage for all of their hard work and attention to detail. END_OF_DOCUMENT_TOKEN_TO_BE_REPLACED