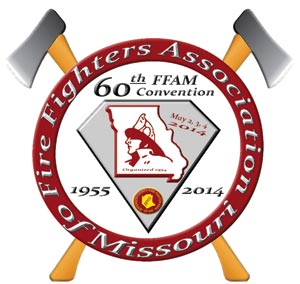 Randolph Mantooth will highlight the 60th Fire Fighters Association of Missouri Convention this May 2–4.

“Sixty Years of Brotherhood in the Fire Service” is the theme of the 60th Fire Fighters Association of Missouri convention hosted by the Jefferson County. The convention will be held at the Best Western Shalimar Plaza Hotel & Convention Center, 1200 West Gannon Drive, Festus, Missouri, on Friday, May 2 through Sunday, May 4. The Jefferson County firefighters previously hosted the convention in 1964 and 1996.

Most of the convention activities will take place around the host hotel including the competitions on Saturday, the vendor booths and meetings. The Friday night mixer and Saturday banquet will be held in the atrium room of the hotel. There are several food establishments nearby, with many in walking distance of the hotel.

END_OF_DOCUMENT_TOKEN_TO_BE_REPLACED

The bitter cold temperatures, snow and ice have challenged all of you on a daily basis and I applaud you for your commitment and dedication to protecting those you serve in these adverse conditions.

Since late fall these conditions too have attributed to a notable increase in the number of residential fire-related fatalities and injuries. From November to date, the Division has assisted with the investigation of 28 incidents resulting in 33 civilian fatalities. Many of these incidents were the result of alternative heat source uses and lack of smoke alarms. Once again, I encourage you to take every opportunity to raise the level of awareness and educate the public on the importance of adequate smoke alarm coverage. If we do not commit to this task who will?

END_OF_DOCUMENT_TOKEN_TO_BE_REPLACED 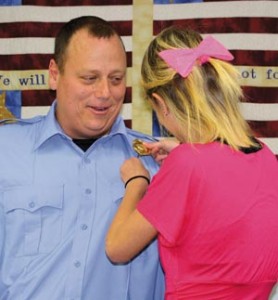 Captain McCutchen began his career as a volunteer Firefighter with the O’Fallon District, October 13, 1998, was promoted to a career firefighter January 1, 2002, and one year later was promoted to a career Engineer’s position. Captain McCutchen is a Missouri State certified Fire Officer II, Fire Service Instructor II, Fire Inspector, and is a member of the St. Charles County Technical Rescue Taskforce.

Captain McCutchen resides in Moscow Mills, Missouri with wife Shelly and their two teenage daughters. All members of the O’Fallon Fire Protection District congratulate Captain McCutchen on his promotion! 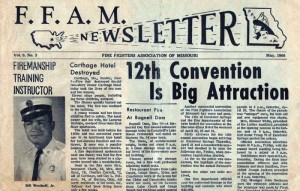 The featured antique newsletter for this article is volume nine, number three, which was published in May of 1966. You may ask why I selected this issue to highlight the 1960’s but the answer is clear if you check the lower left hand corner of the copy, my picture is there!

The 1960’s were wild times for our country. In 1964 Congress gave President Johnson authorization to use ‘conventional’ military force in South East Asia and by 1966, we had 500,000 troops in Vietnam. In March of 1966, two months before this newsletter was published, 200,000 people participated in a worldwide demonstration against the war.

This was also the time in our history when race riots continued to increase across our nation. In many major cities, the National Guard was called out to bring back law and order.

END_OF_DOCUMENT_TOKEN_TO_BE_REPLACED

There are five districts which will stand for election at the 2014 Convention in Festus, Missouri. All five of the Directors currently serving in these Districts have filed for re-election. Anyone currently listed from a department of good standing within the listed districts may submit their name for nomination. A district listing can be found on the FFAM website; www.ffam.org. Go to Officers – District and a state map is located at the bottom of that page. You must reside within the district you are running for.

END_OF_DOCUMENT_TOKEN_TO_BE_REPLACED

The brotherhood of firefighters came together once again because of a line of duty death. Lt. Britt’s tragic death is a reminder that firefighters face different kinds of risks on every call they make. We join with all of you in expressing sympathy to the family and fellow firefighters of Columbia. Our prayers have been and continue to be with all involved. One significant tribute was the presentation of the U.S. Honor Flag. Several individuals were present at the Firefighters’ Memorial as they stopped with the flag. The ceremony was simple and brief, but very meaningful. Other tributes were meaningful as well.

END_OF_DOCUMENT_TOKEN_TO_BE_REPLACED 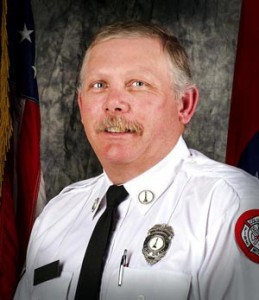 END_OF_DOCUMENT_TOKEN_TO_BE_REPLACED

What a busy time since our last newsletter. Many things have taken place since then, and I will try to enlighten you on several of them.

Because of the severe weather, we canceled our scheduled February 2 FFAM Board meeting that was to be held in Festus, Missouri at the host hotel of our annual convention. So I re-scheduled the board meeting for March 2 in Sedalia, but again, the weatherman was predicting 6 to 8 inches of snow on top of some ice. I felt the safety of all that would be attending would be at risk and therefore canceled that meeting also. We might look for a better date but could end up just waiting for the board meeting at convention in May.